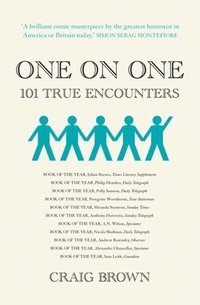 One on One E-bok

av Craig Brown
E-bok (EPUB - DRM), Engelska, 2011-09-22
Den här boken kan endast laddas ned av privatpersoner.
73
Den här boken kan endast laddas ned av privatpersoner.
Ladda ned
Spara som favorit
Laddas ned direkt
Läs i vår app för iPhone och iPad
Finns även som
Visa alla 1 format & utgåvor
101 chance meetings, juxtaposing the famous and the infamous, the artistic and the philistine, the pompous and the comical, the snobbish and the vulgar, each 1,001 words long, and with a time span stretching from the 19th century to the 21st.Life is made up of individuals meeting one another. They speak, or don't speak. They get on, or don't get on. They make agreements, which they either hold to or ignore. They laugh, they cry, they are excited, they are indifferent, they share secrets, they say 'How do you do?' Often it is the most fleeting of meetings that, in the fullness of time, turn out to be the most noteworthy.'One on One' examines the curious nature of different types of meeting, from the oddity of meetings with the Royal Family (who start giggling during a recital by TS Eliot) to those often perilous meetings between old and young (Gladstone terrifying the teenage Bertrand Russell) and between young and old (the 23 year old Sarah Miles having her leg squeezed by the nonagenarian Bertrand Russell), and our contemporary random encounters on television (George Galloway meeting Michael Barrymore on Celebrity Big Brother).Ingenious in its construction, witty in its narration, panoramic in its breadth, 'One on One' is a wholly original book.
Visa hela texten