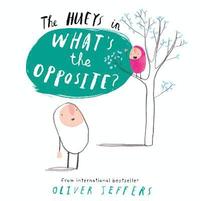 av Oliver Jeffers
Häftad Engelska, 2016-07-28
89
Köp
Spara som favorit
Finns även som
Visa alla 1 format & utgåvor
A comic visual exploration of opposites, from prize-winning, internationally best-selling picture book maker, Oliver Jeffers. In this 4th title in the series, the Hueys explore the concept of opposites in their characteristically quirky way. Starting out with some easy ones like 'up' and 'down', they move on to ever more wildy imaginative examples, guaranteed to raise a smile! Packed full of visual humour, this book will be enjoyed by children and adults alike.
Visa hela texten

Praise for The Incredible Book Eating Boy: 'Mouth-wateringly irresistible' The Guardian 'This is a book that children will devour' The Observer Praise for Lost and Found: 'A heart-warming story' The Guardian Praise for How to Catch a Star: 'The best recent picture book by light years, is stylishly spellbinding.' Telegraph Praise for The Heart and the Bottle: 'Profoundly moving' The Irish Times

Oliver Jeffers graduated from The University of Ulster in 2001 with First Class honours. His outstanding talent has been recognised by several high-profile awards, including the Nestle Children's Book Prize Gold Award. 'Lost and Found' animation was broadcast on Channel 4. Oliver lives and works in Brookyln, New York.