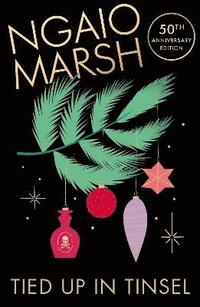 Tied Up in Tinsel

av Ngaio Marsh
Häftad Engelska, 2022-11-10
126
Köp
Spara som favorit
Finns även som
Visa alla 3 format & utgåvor
Ngaio Marsh's classic Christmas murder mystery in a special 50th anniversary edition. Christmas time in an isolated country house and, following a flaming row in the kitchen, there's murder inside. When a much disliked visiting servant disappears without trace after playing Santa Claus, foul play is at once suspected - and foul play it proves to be. Only suspicion falls not on the staff but on the guests, all so unimpeachably respectable that the very thought of murder in connection with any of them seems almost heresy. When Superintendent Roderick Alleyn returns unexpectedly from a trip to Australia, it is to find his beloved wife in the thick of an intriguing mystery...
Visa hela texten

'So entertaining that I recommend it unreservedly.' Daily Telegraph 'Agreeably effortless telling.' Guardian 'One of her best and most baffling mysteries.' Daily Express

Dame Ngaio Marsh was born in New Zealand in 1895 and died in February 1982. She wrote over 30 detective novels and many of her stories have theatrical settings, for Ngaio Marsh's real passion was the theatre. She was both an actress and producer and almost single-handedly revived the New Zealand public's interest in the theatre. It was for this work that she received what she called her 'damery' in 1966.