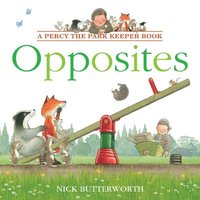 av Nick Butterworth
Häftad Engelska, 2022-08-04
101
Köp
Spara som favorit
Learn about opposites with Percy the park keeper and his animal friends in this fun first concept book from highly regarded, award-winning author/illustrator Nick Butterworth, creator of One Snowy Night. Learning all about opposites is much easier when you do it with friends, and in this book children will find all their favourite characters from Percy's Park! Based on the bestselling picture books by Nick Butterworth, including After the Storm and One Snowy Night, this simple and fun first concept book is perfect for nature lovers and the very youngest of Percy's fans! Percy and his animal friends have delighted readers around the world for over thirty years!
Visa hela texten

Praise for One Springy Day: 'Brimming with warmth and gentle humour.' Sally Morris, Daily Mail 'An absolute must for every young book shelf' Reading Zone 'A timeless classic' Story Kids Praise for One Snowy Night: 'A heartwarming bedtime tale...' Susan Hill, The Independent 'A lovely book to share at bedtime' Children's Book News '... it's just right for reading aloud on a cold day' Books for Keeps

Nick Butterworth was born in London and grew up in a sweet shop in Essex. He worked for various major graphic design companies before becoming a full-time author and illustrator. Among his picture books are Thud!, QPootle5, Jingle Bells, Albert le Blanc, Tiger and The Whisperer, winner of the Nestle Gold Award. But he is best known for his stories about Percy the Park Keeper, which have sold more than 9 million copies worldwide. Percy has also appeared in his own television series.