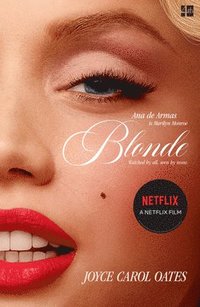 av Joyce Carol Oates
Häftad Engelska, 2022-09-15
152
Köp
Spara som favorit
Finns även som
Visa alla 5 format & utgåvor
NOW A MAJOR NETFLIX FILM, STARRING ANA DE ARMAS, ADRIEN BRODY, BOBBY CANNAVALE AND JULIANNE NICHOLSON, DIRECTED BY ANDREW DOMINIK 'A torrentially imaginative, compulsively readable tour de force' Sunday Telegraph 'A fabulous reinvention of the life of a fabulous reinvention, and a cracking page-turner to boot' Evening Standard Blonde is a mesmerising novel about the most enduring and evocative cultural icon of the 20th century: the woman who became Marilyn Monroe. A fragile and gifted young woman, Norma Jeane Baker makes and remakes her identity: she is the orphan whose mother is declared mad; the woman who changes her name to be an actress; the fated celebrity, lover and muse. Told in her voice, Blonde shows a culture hypnotised by its own myths, and the devastating effects it had on Hollywood's greatest star. 'This masterpiece about Marilyn Monroe's life is audacious, gripping and clever' Rose Tremain 'If you haven't read Joyce Carol Oates before, start here, and now' Independent
Visa hela texten

'Nobody has ever caught Marilyn more brilliantly in words than Oates' Sunday Times 'This masterpiece about Marilyn Monroe's life is audacious, gripping and clever. A meditation on fame, exile and lovelessness, but most importantly a siren shriek against the commodification of women through the decades' Rose Tremain 'A fabulous reinvention of the life of a fabulous reinvention, and a cracking page-turner to boot' Evening Standard 'A torrentially imaginative, compulsively readable tour de force' Sunday Telegraph 'A mighty - and a mesmerizing - book' Elaine Showalter, Literary Review 'If you haven't read Joyce Carol Oates before, start here, and now' Julie Myerson, Independent 'Blonde is an epic achievement, a masterpiece, a piece of art so shatteringly well-conceived and lavishly-wrought that at times it almost does not seem like a mere book' Independent on Sunday 'Novelists such as John Updike, Philip Roth, Tom Wolfe and Norman Mailer slug it out for the title of the Great American Novelist. But maybe they're wrong. Maybe, just maybe, the Great American Novelist is a woman' Herald

Joyce Carol Oates is a recipient of the National Book Critics Circle Lifetime Achievement Award, the National Book Award, the PEN/Malamud Award, the LA Times Book Award (2018) and the Jerusalem Prize (2019). Her books include We Were the Mulvaneys, Blonde, Carthage, A Book of American Martyrs, Hazards of Time Travel, My Life as a Rat and Night. Sleep. Death. The Stars. She is Professor of Humanities at Princeton University.