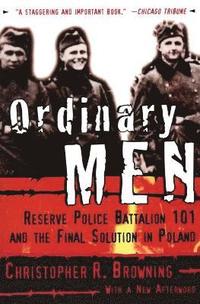 Reserve Police Battalion 101 and the Final Solution in Poland

av Christopher Browning
(3 röster)  |  Läs 1 recension
Häftad Engelska, 1993-05-01
165
Köp
Spara som favorit
Finns även som
Visa alla 2 format & utgåvor
An account of how a unit of average middle-aged Germans became the cold-blooded murderers of tens of thousands of Jews. Browning tells about such Germans, and helps the reader to understand, not only what they did to make the Holocaust happen, but also how they were transformed psychologically.
Visa hela texten

"Helps us understand, better than we did before, not only what they did to make the Holocaust happen but also how they were transformed psychologically from the ordinary men of [the] title into active participants in the most monstrous crime in human history.""-- New York Times Book Review""A staggering and important book, a book that manages without polemic to communicate at least an intimation of the unthinkable."-- Michael Dorris, " Chicago Tribune""A remarkable--and singularly chilling--glimpse of human behavior...This meticulously researched book...represents a major contribution to the literature of the Holocaust." -- Andrew Nagorski, "Newsweek"

Christopher R. Browning is professor of history at Pacific Lutheran University in Tacoma, Washington. He is a contributor to Yad Vashem's official twenty-four-volume history of the Holocaust and the author of two earlier books on the subject.