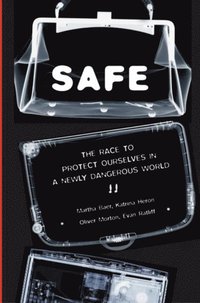 Science and Technology in the Age of Ter

av Martha Baer, Katrina Heron, Oliver Morton, Evan Ratliff
E-bok (EPUB - DRM), Engelska, 2009-03-17
Den här boken kan endast laddas ned av privatpersoner.
156
Den här boken kan endast laddas ned av privatpersoner.
Ladda ned
Spara som favorit
Laddas ned direkt
Läs i vår app för iPhone och iPad
If our society is the most technologically sophisticated on Earth, then why can't we protect ourselves from terrorists and other threats to our safety and security? This is the question that frustratesand scaresall of us today, and the answers have proved maddeningly elusive. Until now. Through dramatic, enlightening, and often entertaining narratives, SAFE makes visibleand understandablethe high-stakes work being done by some of the most ingenious problem-solvers across the country and around the world, people committed to creating real and dependable security in the twenty-first century.The characters in these pages, from scientists and engineers to academics, entrepreneurs, and emergency workers, take us into a fascinating world of inquiry and discovery. Their stories reveal where our greatest vulnerabilities lie and where our best hope deservedly shines through. They show why the systems we rely on to protect ourselves can also be exploited by others to create catastropheand what we can do to outsmart the terrorists. We have ample proof that terrorists will go to great lengths to understand how our technologies can be put to destructive use. Now it's time to ask ourselves a question: Are we willing to let them keep beating us at our own game? For the brilliant and colorful innovators in these pages, the answer is no.Among them are Eric Thompson, an expert digital code breaker instrumental in deciphering hidden Al Qaeda messages; Mike Stein, a New York City firefighter turned technologist who is working to overcome the numerous communications failures of 9/11; Eve Hinman, who conducts structural autopsies at the scene of explosions, including the Oklahoma City bombing, in order to develop more blast-resistant designs; Ken Alibek, the infamous architect of the former Soviet bioweapons program and now an American entrepreneur working in the business of defending his adopted country from bioterrorism; Kris Pister and Michael Sailor, university researchers developing sensors no larger than a speck of dust; Rafi Ron, former head of security for Ben Gurion Airport in Tel Aviv and now a leading strategist on U.S. airport security; Tara O'Toole, who stages doomsday bioterror scenarios in order to craft better biodefense systems; and Jeff Jonas, a high-rolling Las Vegas software entrepreneur whose methods for spotting casino cheats might just have uncovered the 9/11 plot.Readers of SAFE will come away understanding the unique challenges posed by technological progress in a networked, and newly dangerous, world. Witnessing the work of this gathering force of innovators up close, they'll be inspired by the power of the human intellect and spiritand realize how important the contributions of individual citizens and communities can be.
Visa hela texten