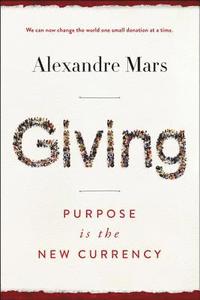 Purpose Is the New Currency

av Alexandre Mars
Inbunden Engelska, 2019-02-21
312
Köp
Spara som favorit
Finns även som
Visa alla 1 format & utgåvor
Do you give to charity? Do you give enough? Those two questions defined Alexandre Mars's journey from venture capitalist to activist. In 2013, Mars began a worldwide journey to learn from people on the ground. He saw a world that was already changing. Fueled by a passion for social change, young people everywhere donated their time and money, but it wasn't enough. There was a barrier to giving. People didn't know what nonprofits were trustworthy and didn't have the time to do the research. Giving became a burden instead of an encouraging and joyful practice. Mars's solution? Epic, a foundation that sends 100 percent of user donations to rigorously vetted charities while reporting its impact in real time. But this isn't just Epic's story, this is about a movement driven by our deep-seated desire to give. It's about how the benefits of technology-increased connectedness and transparency-can amplify impact. It's about holding our new centers of power-multinational corporations-accountable. It's an urgent call to action: give more, give better. 100% of the author's proceeds will go the Epic portfolio organizations to help disadvantaged youth.
Visa hela texten

Alexandre Mars is the founder of Epic, a charitable giving platform, through which he has enable some of the world's largest organizations-L'oreal, Dior, Giphy-to give more. Before Epic, Mars was a serial entrepreneur who launched and sold several start-ups. In 2014 he began a venture capital fund, blisce/. But now Mars now dedicates 90% of his time to Epic and spreading the joy of giving.