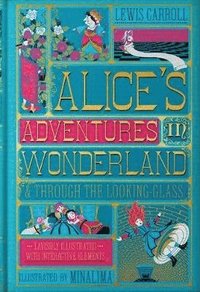 av Lewis Carroll
(2 röster)
Inbunden Engelska, 2019-10-31
307
Köp
Spara som favorit
Lewis Carroll's beloved classic stories are reimagined in this deluxe illustrated gift edition from the award-winning design studio behind the graphics for the Harry Potter film franchise, MinaLima-designed with stunning full color artwork and several interactive features. Originally published in 1865, Lewis Carroll's exquisite Alice's Adventures in Wonderland & Through the Looking-Glass have remained revered classics for generations. The story of Alice, an inquisitive heroine who falls through a rabbit hole and into a whimsical world, has captured the hearts of readers of all ages. Perhaps the most popular female character in English literature, Alice is accompanied on her journey of trials and tribulations by the frantic White Rabbit, the demented and terrifying Queen of Hearts, the intriguing Mad Hatter, and many other eccentric characters. Lewis Carroll's beloved companion stories Alice's Adventures in Wonderland and Through the Looking Glass are reinvented on one volume by the talented design firm MinaLima, whose fey drawings of some of Western literature's most famous characters will delight and enthrall, In addition, they have created interactive features exclusive to this edition, including: Alice with extendable legs and arms The rabbit's house which opens to reveal a giant Alice The Cheshire cat with a pull tab that removes the cat and leaves the cat's grin A flamingo croquet club that swings to hit the hedgehog A removable map of the Looking Glass world This keepsake illustrated edition-the sixth book in Harper Design's series of illustrated children's classics-will be treasured by for years to come.
Visa hela texten

Charles Lutwidge Dodgson (1832-1898), better known by his pen name Lewis Carroll, published Alice's Adventures in Wonderland in 1865 and its sequel, Through the Looking-Glass, and What Alice Found There, in 1871. Considered a master of the genre of literary nonsense, he is renowned for his ingenious wordplay and sense of logic, and his highly original vision. MinaLima is an award-winning graphic design studio founded by Miraphora Mina and Eduardo Lima, renowned for establishing the graphic style of the Harry Potter and Fantastic Beasts film series. Specializing in design and illustration, Miraphora and Eduardo have continued their involvement in the Wizarding World through numerous design commissions, from creating all the graphics for The Wizarding World of Harry Potter-Diagon Alley at Universal Orlando Resort to designing award-winning publications. Their bestselling books include the MinaLima editions of Harry Potter and the Sorcerer's Stone, Harry Potter and the Chamber of Secrets, Harry Potter Film Wizardry, The Case of Beasts: Explore the Film Wizardry of Fantastic Beasts and Where to Find Them, The Archive of Magic: Explore the Film Wizardry of Fantastic Beasts: The Crimes of Grindelwald, and J. K. Rowling's Fantastic Beasts screenplays. Studio MinaLima is renowned internationally for telling stories through design and has created its own MinaLima Classics series, reimagining a growing collection of much-loved tales including Peter Pan, The Secret Garden, The Adventures of Pinocchio, and The Wonderful Wizard of Oz.