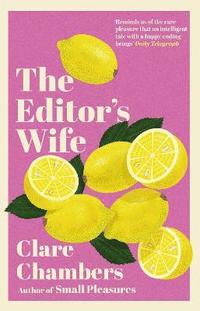 av Clare Chambers
Häftad Engelska, 2008-02-01
113
Köp
Spara som favorit
Kan levereras innan julafton!
'So charming' Marian Keyes From the highly-acclaimed author of SMALL PLEASURES - winner of the 2022 British Book Awards Page-Turner When aspiring novelist Christopher Flinders drops out of university to write his masterpiece (in between shifts as a fish delivery man and builder's mate), his family is sceptical. But when he is taken up by the London editor Owen Goddard and his charming wife Diana it seems success is just around the corner. Christopher's life has so far been rather short of charm - growing up in an unlovely suburb, with unambitious parents and a semi-vagrant brother - and he is captivated by his generous and cultured mentors. However, on the brink of realising his dream, Christopher makes a desperate misjudgement which results in disaster for all involved. Shattered, he withdraws from London and buries himself in rural Yorkshire, embracing a career and a private life marked by mediocrity. Twenty years on, a young academic researching into Owen Goddard seeks him out, and Christopher is forced to exhume his past, setting him on a path to a life-changing discovery. Praise for Clare Chambers: 'Thoroughly enjoyable and very clever' Sunday Express 'Effortless to read, but every sentence lingers in the mind' Lissa Evans on Small Pleasures 'Beautifully observed and achingly funny' Woman & Home 'Chambers' eye for undemonstrative details achieves a Larkin-esque lucidity' Guardian on Small Pleasures 'Reminds us of the rare pleasure that an intelligent tale with a happy ending brings' The Sunday Times
Visa hela texten

Clare Chambers was born in south east London in 1966. She studied English at Oxford and spent the year after graduating in New Zealand, where she wrote her first novel, Uncertain Terms, published when she was 25. She has since written eight further novels, including Learning to Swim (Century 1998) which won the Romantic Novelists' Association best novel award and was adapted as a Radio 4 play, and In a Good Light (Century 2004) which was longlisted for the Whitbread best novel prize. Clare began her career as a secretary at the publisher Andre Deutsch, when Diana Athill was still at the helm. They not only published her first novel, but made her type her own contract. In due course she went on to become a fiction and non-fiction editor there herself, until leaving to raise a family and concentrate on her own writing. Some of the experiences of working for an eccentric, independent publisher in the pre-digital era found their way into her novel The Editor's Wife (Century, 2007). When her three children were teenagers, inspired by their reading habits, she produced two YA novels, Bright Girls (HarperCollins 2009) and Burning Secrets (HarperCollins 2011). Her most recent novel is Small Pleasures (Weidenfeld & Nicolson, 2020). She takes up a post as Royal Literary Fund Fellow at the University of Kent in September 2020.