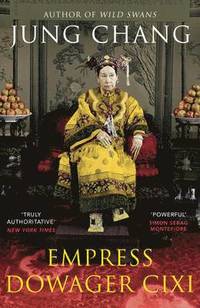 The Concubine Who Launched Modern China

av Jung Chang
Häftad Engelska, 2014-07-03
214
Köp
Spara som favorit
Finns även som
Visa alla 1 format & utgåvor
Discover the extraordinary story of the woman who brought China into the modern age, from the bestselling author of Wild Swans In this groundbreaking biography, Jung Chang vividly describes how Empress Dowager Cixi - the most important woman in Chinese history - brought a medieval empire into the modern age. Under her, the ancient country attained virtually all the attributes of a modern state and it was she who abolished gruesome punishments like 'death by a thousand cuts' and put an end to foot-binding. Jung Chang comprehensively overturns the conventional view of Cixi as a diehard conservative and cruel despot and also takes the reader into the depths of her splendid Summer Palace and the harem of Beijing's Forbidden City, where she lived surrounded by eunuchs - with one of whom she fell in love, with tragic consequences. Packed with drama, fast-paced and gripping, it is both a panoramic depiction of the birth of modern China and an intimate portrait of a woman: as the concubine to a monarch, as the absolute ruler of a third of the world's population, and as a unique stateswoman. 'Powerful' Simon Sebag Montefiore 'Truly authoritative' New York Times 'Wonderful' Sunday Times **Shortlisted for the James Tait Black Biography Prize**
Visa hela texten

Jung Chang tells a story and what a colourful tale it is...This is history at its most readable. -- George Walden * Evening Standard * A truly authoritative account of Cixi's rule. Her story is both important and evocative. -- Orville Schell * New York Times * Filled with new revelations, it's a gripping and surprising story of an extraordinary woman in power. Using Chinese sources, totally untapped by western books, this reappraises one of the great monstresses of modern history... Jung Chang's revisionism means that this book reveals a new and different woman: ambitious, sometimes murderous, but pragmatic and unique. All of this adds up to make Empress Dowager Cixi a powerful read. -- Simon Sebag Montefiore * BBC History Magazine * If there is one woman who mattered in the history of modern China, it is the empress dowager Cixi...[Her] conventional image is queried in this detailed and beautifully narrated biography, which at long last restores the empress dowager to her rightful place. Chang's book relies heavily on the vast holdings in the imperial archives in Beijing... She has a wonderful eye for the telling detail and excels at unravelling palace intrigues and corridor politics. -- Frank Dikotter * Sunday Times * Chang has a proven Midas touch... Empress Dowager, by returning to female experience in the style of Wild Swans yet focusing, like Mao, on a controversial ruler, should appeal to fans of both. -- Jeffrey Wasserstrom * Financial Times * A captivating cradle-to-grave biography * VOGUE * In this vivid biography, as colourful and intricate as the embroidery on a Chinese robe, [Jung Chang] uses new evidence and meticulous research to cast a spotlight on the amazing woman she regards as the mother of modern China...This is a rich, dramatic story of rebellions, battles, plotting, rivalry, foreign invasion, punishment and forbidden love. -- Bel Mooney * Daily Mail * An absorbing read. -- Josh Neicho * Independent on Sunday * This is an important book, drawing attention to a period in China's history that has received little, and usually only negative, attention. Chang writes with verve, energy and evident concern for the country in which her books are proscribed and her family was made to suffer during the Cultural Revolution. * BBC History Magazine *

Jung Chang is the best-selling author of Wild Swans (1991, which the Asian Wall Street Journal called the most read book about China), and Mao: The Unknown Story (2005, with Jon Halliday), which was described by Time Magazine as 'an atom bomb of a book'. Her books have been translated into more than 40 languages and sold more than 15 million copies outside mainland China where they are both banned.. She was born in China in 1952, and came to Britain in 1978. She lives in London.