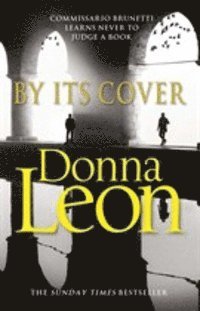 av Donna Leon
Häftad Engelska, 2015-03-12
107
Köp
Spara som favorit
Finns även som
Visa alla 1 format & utgåvor
'The multiple award-winning Leon has lost none of her talent for weaving intrigue, and the atmosphere of Venice is as beguiling as ever.' Living North A Washington Post Bestseller A New York Times Bestseller A Seattle Times Best Mystery and Crime Novel of 2014 __________________________________ By Its Cover is the much anticipated twenty-third instalment in Donna Leon's bestselling crime series, where Commissario Brunetti is better than ever as he addresses questions of worth and value alongside his ever-faithful team of Ispettore Vianello and Signorina Elettra. When several valuable antiquarian books go missing from a prestigious library in the heart of Venice, Commissario Brunetti is immediately called to the scene. The staff suspect an American researcher has stolen them, but for Brunetti something doesn't quite add up. Taking on the case, the Commissario begins to seek information about some of the library's regulars, such as the ex-priest Franchini, a passionate reader of ancient Christian literature, and Contessa Morosini-Albani, the library's chief donor, and comes to the conclusion that the thief could not have acted alone. However, when Franchini is found murdered in his home, the case takes a more sinister turn and soon Brunetti finds himself submerged in the dark secrets of the black market of antiquarian books. Alongside his ever-faithful team of Ispettore Vianello and Signorina Elettra, he delves into the pages of Franchini's past and into the mind of a book thief in order to uncover the terrible truth.
Visa hela texten

The multiple award-winning Leon has lost none of her talent for weaving intrigue, and the atmosphere of Venice is as beguiling as ever. * Living North * Leon's command of the baroque Italian thriller is second to none. * Good Book Guide * An excellent entry in the Brunetti series ... There are few detectives with whom I enjoy spending time more and I must now endure the long wait for Leon's next book. * 2606 Books *

Donna Leon was named by The Times as one of the 50 Greatest Crime Writers. She is an award-winning crime novelist, celebrated for the bestselling Brunetti series. Donna has lived in Venice for thirty years and previously lived in Switzerland, Saudi Arabia, Iran and China, where she worked as a teacher. Donna's books have been translated into thirty-five languages and have been published around the world. Her previous novels featuring Commissario Brunetti have all been highly acclaimed; including Friends in High Places, which won the CWA Macallan Silver Dagger for Fiction, Fatal Remedies, Doctored Evidence, A Sea of Troubles and Beastly Things.