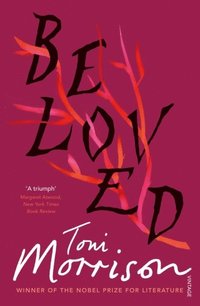 av Toni Morrison
(3 röster)
Häftad Engelska, 1997-08-01
139
Köp
Spara som favorit
Discover Toni Morrison's most iconic work in this Pulitzer-prize winning novel that exemplifies her powerful and important place in contemporary American literature. 'An American masterpiece' AS Byatt It is the mid-1800s and as slavery looks to be coming to an end, Sethe is haunted by the violent trauma it wrought on her former enslaved life at Sweet Home, Kentucky. Her dead baby daughter, whose tombstone bears the single word, Beloved, returns as a spectre to punish her mother, but also to elicit her love. Told with heart-stopping clarity, melding horror and beauty, Beloved is Toni Morrison's enduring masterpiece. 'Toni Morrison was a giant of her times and ours..."Beloved," is a heartbreaking testimony to the ongoing ravages of slavery, and should be read by all' Margaret Atwood, New York Times 'The literary titan we must never stop learning from' Metro Winner of the PEN/Saul Bellow award for achievement in American fiction **One of the BBC's 100 Novels That Shaped Our World**
Visa hela texten

'Toni Morrison was a giant of her times and ours... Beloved is a heartbreaking testimony to the ongoing ravages of slavery, and should be read by all' 'I adored her honesty. I admired the way she occupied her space in the world. I believed her' '[Toni Morrison] led and we followed, and she showed us the beauty of the language, and the power that was unleashed when that beauty was allied to a great heart and a ferocious mind' 'No other writer in my lifetime, or perhaps ever, has married so completely an understanding of the structures of power with knowledge of the human heart' 'Toni Morrison is the greatest chronicler of the American experience that we have ever known' 'Morrison is, to me, the best writer the English-speaking world has ever seen' 'Morrison's legacy in commemorating slavery's survivors will endure and uplift for centuries to come' 'Her every word a caress, her every sentence an embrace, her every paragraph, a cupping of her hands around our faces that said: I know you, I see you, we are together' 'I have never read anyone else like her . . . She was an opener of doors, doors that seemed they might always be shut, doors shut so tight they seemed not to be doors at all' 'Her legacy is total excellence . . . she is magnificent, her emotional intelligence is second to none and her bravery was equal to her artistry' 'Morrison almost single-handedly took American fiction forward in the second half of the twentieth century' '[Toni Morrison's] irreverence was godly' * Guardian * A beautiful book and it's beautifully written -- Kit de Waal * Good Housekeeping UK * My favourite book of all time -- Sareeta Domingo * Good Housekeeping * Morrison's stunning trilogy is an evocation of black life over the past four centuries. It defies summary. Completed almost 25 years ago, these novels top anything produced by any American writer including Hemingway, Updike and DeLillo -- Trevor Phillips * Sunday Times * [A] beautiful, haunting novel -- Stig Abell * Sunday Times * More than one of Morrison's books could be classed as masterpieces, but this one is famous for a reason: everyone should read it -- Bernice McFadden, author of SUGAR * Guardian * A triumph -- Margaret Atwood * New York Times Book Review * A magnificent achievement... An American masterpiece -- A. S. Byatt * Guardian * There is something great in Beloved: a play of human voices, consciously exalted, perversely stressed, yet holding true. It gets you * New Yorker *

Toni Morrison was awarded the Nobel Prize in Literature in 1993. She was the author of many novels, including The Bluest Eye, Sula, Beloved, Paradise and Love. She received the National Book Critics Circle Award and a Pulitzer Prize for her fiction and was awarded the Presidential Medal of Freedom, America's highest civilian honour, in 2012 by Barack Obama. Toni Morrison died on 5 August 2019 at the age of eighty-eight.