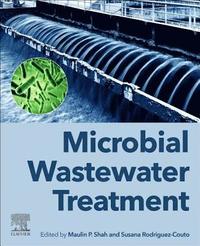 "A wide range of applications microorganisms in biotechnology shows their enormous importance in the environment and the possibilities of beneficial application for man and his environment. The book also contains a lot of valuable information enabling not only to assess the possibility of using specific microorganisms for many tasks, but also to determine the optimal conditions for their existence. The book can be recommended to researchers and students interested in environmental engineering, microbiology and biotechnology. This is a good and cognitively valuable scientific position." --Przemysl Chemiczny

Maulin Shah is an active researcher and scientific writer for over 20 years. He received a B.Sc. degree in 1999 in Microbiology from Gujarat University in Godhra, Gujarat, India. He also earned his Ph.D. degree in 2005 in Environmental Microbiology from Sardar Patel University in Vallabh Vidyanagar, Gujarat, India. His research interests include biological wastewater treatment, environmental microbiology, biodegradation, bioremediation, & phytoremediation of environmental pollutants from industrial wastewaters. He has published more than 250 research papers in national and international journals of repute on various aspects of microbial biodegradation and bioremediation of environmental pollutants. He is the editor of 55 books of international repute. Susana Rodrguez-Couto (female) got her B.Sc. and M.Sc. in Chemistry (Industrial Chemistry) from the University of Santiago de Compostela in 1992 and her Ph.D. in Chemistry in 1999 from the University of Vigo, obtaining the maximal grade (magna cum laude) and, in addition, she was awarded with the Extraordinary Prize for Doctoral Thesis in Chemistry. She worked as an Associate Professor and an Isidro Parga Pondal Senior Researcher at the University of Vigo (2000-2004), as a Ramn y Cajal Senior Researcher at Rovira i Virgili University (2004-2008) and as an Ikerbasque Research Professor (2009-2019). She has also worked as an Invited Researcher at the Institute from Environmental Biotechnology, Graz University of Technology (Austria) and at the Department of Biological Engineering, University of Minho (Portugal). In 2008, she received the I3 Professor from the Spanish Ministry of Science and Education to the recognition of an outstanding research activity. In March 2021 she is joining LUT School of Engineering Science at Mikkeli, Finland, as a Full Professor in biological water treatment. She has published more than 140 articles in highly reputed international journals (h index 42). She is editor of several journals (3Biotech, Frontiers) and 14 Elsevier books.