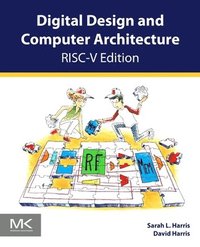 av Sarah L Harris
Häftad Engelska, 2021-11-03
903
Köp
Spara som favorit
Finns även som
Visa alla 1 format & utgåvor
The newest addition to the Harris and Harris family of Digital Design and Computer Architecture books, this RISC-V Edition covers the fundamentals of digital logic design and reinforces logic concepts through the design of a RISC-V microprocessor. Combining an engaging and humorous writing style with an updated and hands-on approach to digital design, this book takes the reader from the fundamentals of digital logic to the actual design of a processor. By the end of this book, readers will be able to build their own RISC-V microprocessor and will have a top-to-bottom understanding of how it works.

Beginning with digital logic gates and progressing to the design of combinational and sequential circuits, this book uses these fundamental building blocks as the basis for designing a RISC-V processor. SystemVerilog and VHDL are integrated throughout the text in examples illustrating the methods and techniques for CAD-based circuit design. The companion website includes a chapter on I/O systems with practical examples that show how to use SparkFun's RED-V RedBoard to communicate with peripheral devices such as LCDs, Bluetooth radios, and motors.

Sarah loves teaching, exploring and developing new technologies, traveling, wind surfing, rock climbing, and playing the guitar. Her recent exploits include researching sketching interfaces for digital circuit design, acting as a science correspondent for a National Public Radio affiliate, and learning how to kite surf. She speaks four languages and looks forward to learning more in the near future. David Harris is the Harvey S. Mudd Professor of Engineering Design at Harvey Mudd College. He received his Ph.D. in electrical engineering from Stanford University and his M.Eng. in electrical engineering and computer science from MIT. Before attending Stanford, he worked at Intel as a logic and circuit designer on the Itanium and Pentium II processors. Since then, he has consulted at Sun Microsystems, Hewlett-Packard, Broadcom, and other design companies. David holds more than a dozen patents and is the author of three other textbooks on chip design, as well as many Southern California hiking guidebooks. When he is not working, he enjoys hiking, flying, and making things with his three sons.