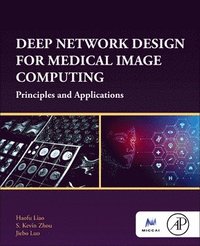 This book will help graduate students and researchers develop a better understanding of the deep learning design principles for MIC and to apply them to their medical problems.

Dr. Haofu Liao is currently an applied scientist of the Rekognition & Video Analysis team at Amazon Web Services, Inc. He received his Ph.D. degree in Computer Science from the University of Rochester, Rochester, NY in 2019 under the supervision of Prof. Jiebo Luo. Prior to that, he received his M.S. degree in Electrical and Computer Engineering from Northeastern University, Boston, MA in 2015 and his B.E. degree from the Beijing University of Posts and Telecommunications, Beijing, China in 2012. His research interest is in the interdisciplinary field between artificial intelligence and medicine. In particular, his research focuses on deep medical image computing where he designs deep learning-based approaches that are tailored for medical imaging or medical image analysis problems. He has authored more than 20 peer-reviewed papers in medical image computing and computer vision venues, including CVPR, MICCAI, TMI, ICPR. S. Kevin Zhou, Ph.D. is currently a Principal Key Expert Scientist at Siemens Healthcare Technology Center, leading a team of full time research scientists and students dedicated to researching and developing innovative solutions for medical and industrial imaging products. His research interests lie in computer vision and machine/deep learning and their applications to medical image analysis, face recognition and modeling, etc. He has published over 150 book chapters and peer-reviewed journal and conference papers, registered over 250 patents and inventions, written two research monographs, and edited three books. He has won multiple technology, patent and product awards, including R&D 100 Award and Siemens Inventor of the Year. He is an editorial board member for Medical Image Analysis journal and a fellow of American Institute of Medical and Biological Engineering (AIMBE). Jiebo Luo is a Professor of Computer Science at the University of Rochester, which joined in 2011 after a prolific career of fifteen years at Kodak Research Laboratories. He has been involved in numerous technical conferences, including serving as a program co-chair of ACM Multimedia 2010, IEEE CVPR 2012, ACM ICMR 2016, and IEEE ICIP 2017, as well as a general co-chair of ACM Multimedia 2018. He has served on the editorial boards of the IEEE Transactions on Pattern Analysis and Machine Intelligence (TPAMI), IEEE Transactions on Multimedia (TMM), IEEE Transactions on Circuits and Systems for Video Technology (TCSVT), IEEE Transactions on Big Data (TBD), ACM Transactions on Intelligent Systems and Technology (TIST), Pattern Recognition, Knowledge and Information Systems (KAIS), Machine Vision and Applications, and Journal of Electronic Imaging. He is currently the Editor-in-Chief of the IEEE Transactions on Multimedia. Professor Luo is a Fellow of ACM, AAAI, IEEE, SPIE and IAPR.