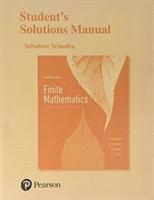 av Larry J Goldstein
Häftad Engelska
696
Köp
Spara som favorit
Kan tyvärr inte levereras innan julafton.
For Finite Math courses for students majoring in business, economics, life science, or social sciences The most relevant choice Finite Mathematics is a comprehensive yet flexible text for students majoring in business, economics, life science, or social sciences. Its varied and relevant applications are designed to pique and hold student interest, and the depth of coverage provides a solid foundation for students' future coursework and careers. Built-in, optional instruction for the latest technology--graphing calculators, spreadsheets, and WolframAlpha--gives instructors flexibility in deciding how to integrate these tools into their course. Thousands of well-crafted exercises-a hallmark of this text-are available in print and online in MyLab(TM) Math to enable a wide range of practice in skills, applications, concepts, and technology. In the 12th Edition, new co-author Steve Hair (Pennsylvania State University) brings a fresh eye to the content and MyLab(TM) Math course based on his experience in the classroom. In addition to its updated applications, exercises, and technology coverage, the revision infuses modern topics such as health statistics and content revisions based on user feedback. The authors relied on aggregated student usage and performance data from MyLab(TM) Math to improve the quality and quantity of exercises. Also available with MyLab Math MyLab(TM) Math is an online homework, tutorial, and assessment program designed to work with this text to engage students and improve results. Within its structured environment, students practice what they learn, test their understanding, and pursue a personalized study plan that helps them absorb course material and understand difficult concepts. In the new edition, MyLab Math has expanded to include a suite of new videos, Interactive Figures, exercises that require step-by-step solutions, support for the graphing calculator, and more. Note: You are purchasing a standalone product; MyLab does not come packaged with this content. Students, if interested in purchasing this title with MyLab, ask your instructor for the correct package ISBN and Course ID. Instructors, contact your Pearson representative for more information. If you would like to purchase both the physical text and MyLab, search for: 0134768639 / 9780134768632 Finite Mathematics & Its Applications plus MyLab Math with Pearson eText -- Title-Specific Access Card Package, 12/e Package consists of: 0134437764 / 9780134437767 Finite Mathematics & Its Applications 0134765729 / 9780134765723 MyLab Math plus Pearson eText -- Standalone Access Card -- for Finite Mathematics & Its Applications
Visa hela texten

Normal 0 false false false EN-US X-NONE X-NONE Larry Goldstein has received several distinguished teaching awards, given more than fifty Conference and Colloquium talks & addresses, and written more than fifty books in math and computer programming. He received his PhD at Princeton and his BA and MA at the University of Pennsylvania. He also teaches part time at Drexel University. David Schneider, who is known widely for his tutorial software, holds a BA degree from Oberlin College and a PhD from MIT. He is currently an emeritus professor of mathematics at the University of Maryland. He has authored eight widely used math texts, fourteen highly acclaimed computer books, and three widely used mathematical software packages. He has also produced instructional videotapes at both the University of Maryland and the BBC. Martha Siegel holds a BA from Russell Sage College, attended Rensselaer Polytechnic Institute as a special student, and received her PhD at the University of Rochester. From 1966 until 1971 she taught at Goucher University in Baltimore. Since 1971 she has been a professor at Towson State University, also in Maryland. Professor Siegel has been on the writing team of this book since the fifth edition and is also the co-author of a precalculus reform book. Steven Hair holds a BS from Virginia Tech and a PhD from Penn State University. He is currently a lecturer and course coordinator at Penn State, where he develops traditional and digital content for finite math and precalculus courses. In his free time, Steven enjoys spending time with his family, playing the saxophone, and fly fishing.