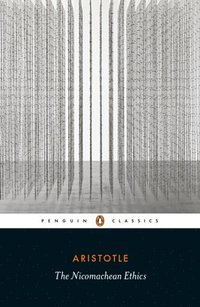 av Aristotle
Häftad Engelska, 2020-04-30
135
Köp
Spara som favorit
Finns även som
Visa alla 8 format & utgåvor
One of the most important philosophical works of all time, in a new Penguin Classics translation by Adam Beresford 'Right and wrong is a human thing' What does it mean to be a good person? Aristotle's famous series of lectures on ethical topics ranges over fundamental questions about good and bad character; pleasure and self-control; moral wisdom and the foundations of right and wrong; friendship and love in all their forms - all set against a rich and humane conception of what makes for a flourishing life. Adam Beresford's freshly researched translation presents many of Aristotle's key terms and idioms in standard English for the first time, and faithfully preserves the unvarnished style of the original.
Visa hela texten

Aristotle was born in the Macedonian city of Stagira in 384 BC, and died in 322. He studied in Plato's Academy in Athens and later became tutor to Alexander the Great, before establishing his own school in Athens, called the Lyceum. His writings, which were of extraordinary range, profoundly affected the whole course of ancient, medieval and modern philosophy. Many of them have survived, including The Nicomachean Ethics, The Politics and Poetics, among others. Adam Beresford is Associate Professor of Philosophy at the University of Massachusetts, Boston. He has previously translated Plato's Protagoras and Meno for Penguin Classics.