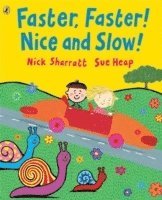 av Nick Sharratt, Sue Heap
Häftad Engelska, 2006-08-01
89
Köp
Spara som favorit
A third title in this superb series by award-winning best friends, Sue Heap and Nick Sharratt. Here is the perfect way to learn about opposites. Whether it's a quiet cat and a noisy dog, a freezing cold or a hot and sunny day or a super fast leopard and a family of slowly-slow snails, Sue and Nick introduce all sorts of opposites in an engaging and memorable way.
Visa hela texten

Nick Sharratt took an Arts Foundation course at Manchester Polytechnic and a BA in Graphic Design at St Martin's. He is well-known for his illustration of the books of Jacqueline Wilson and Jeremy Strong and for his own titles. He has won many awards, including the Children's Book Award in 2001 for Eat Your Peas. Nick lives in Brighton. After graduating from Hull College of Art, Sue Heap worked in animation and as a designer at several children's book publishers - this was how she met her friend Nick Sharratt when she was responsible for his first picture book. Sue has illustrated over thirty children's books, including Cowboy Baby for which she won the prestigious Smarties Prize. She's lived in many places including Egypt, Germany and Singapore, and now lives in Oxfordshire.