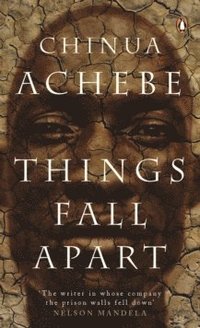 av Chinua Achebe
(2 röster)  |  Läs 2 recensioner
Häftad Engelska, 2006-01-01
103
Köp
Spara som favorit
Finns även som
Visa alla 5 format & utgåvor
One of the BBC's '100 Novels That Shaped Our World' A worldwide bestseller and the first part of Achebe's African Trilogy, Things Fall Apart is the compelling story of one man's battle to protect his community against the forces of change Okonkwo is the greatest wrestler and warrior alive, and his fame spreads throughout West Africa like a bush-fire in the harmattan. But when he accidentally kills a clansman, things begin to fall apart. Then Okonkwo returns from exile to find missionaries and colonial governors have arrived in the village. With his world thrown radically off-balance he can only hurtle towards tragedy. First published in 1958, Chinua Achebe's stark, coolly ironic novel reshaped both African and world literature, and has sold over ten million copies in forty-five languages. This arresting parable of a proud but powerless man witnessing the ruin of his people begins Achebe's landmark trilogy of works chronicling the fate of one African community, continued in Arrow of God and No Longer at Ease. 'His courage and generosity are made manifest in the work' Toni Morrison 'The writer in whose company the prison walls fell down' Nelson Mandela 'A great book, that bespeaks a great, brave, kind, human spirit' John Updike With an Introduction by Biyi Bandele
Visa hela texten

Chinua Achebe was born in Nigeria in 1930. He was raised in the large village of Ogidi, one of the first centers of Anglican missionary work in Eastern Nigeria, and was a graduate of University College, Ibadan. His early career in radio ended abruptly in 1966, when he left his post as Director of External Broadcasting in Nigeria during the national upheaval that led to the Biafran War. Achebe joined the Biafran Ministry of Information and represented Biafra on various diplomatic and fund-raising missions. He was appointed Senior Research Fellow at the University of Nigeria, Nsukka, and began lecturing widely abroad. For over fifteen years, he was the Charles P. Stevenson Professor of Languages and Literature at Bard College. He was Professor at the David and Marianna Fisher University and Professor of Africana studies at Brown University. Chinua Achebe wrote over twenty books - novels, short stories, essays and collections of poetry - and received numerous honours from around the world, including the Honourary Fellowship of the American Academy of Arts and Letters, as well as honourary doctorates from more than thirty colleges and universities. He was also the recipient of Nigeria's highest award for intellectual achievement, the Nigerian National Merit Award. In 2007, he won the Man Booker International Prize for Fiction. Chinua Achebe died in 2013.