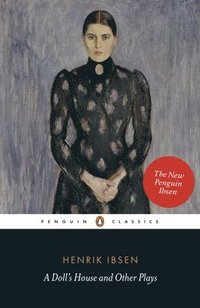 A Doll's House and Other Plays

With Pillars of the Community, Ghosts and an Enemy of the People

av Henrik Ibsen, Tore Rem
Häftad Engelska, 2016-06-30
132
Köp
Spara som favorit
A Doll's House/Ghosts/Pillars of the Community/An Enemy of the People 'Our home has never been anything other than a play-house. I've been your doll-wife here, just as at home I was Daddy's doll-child' These four plays established Ibsen as the leading figure in the theatre of his day, sending shockwaves throughout Europe and beyond. A Doll's House scandalized audiences with its free-thinking heroine Nora. Ibsen's even more radical follow-up, Ghosts, exposes family secrets and sexual double-dealing, while Pillars of the Community and An Enemy of the People both explore the hypocrisy and the dark tensions at the heart of society. This new translation, the first to be based on the latest critical edition of Ibsen's works, offers the best version available in English. A new translation by DEBORAH DAWKIN and ERIK SKUGGEVIK With an Introduction by TORE REM General Editor TORE REM
Visa hela texten

Henrik Ibsen (Author) Henrik Ibsen (1828-1906) is often called 'the Father of Modern Drama'. Born in Norway, he left his homeland in 1864 for a 21-year long voluntary exile in Italy and Germany. After successes with the verse dramas Brand and Peer Gynt, he turned to prose, writing his great 12-play cycle of society dramas between 1877 and 1899. This included A Doll's House, Ghosts, Hedda Gabler, The Master Builder, and, finally, When We Dead Awaken. Deborah Dawkin (Translator) Deborah Dawkin is a researcher at University College London and the British Library. She has been a literary translator from Norwegian for the last ten years. Erik Skuggevik (Translator) Erik Skuggevik is a lecturer in Translation Studies at the University of Surrey and the University of Westminister.