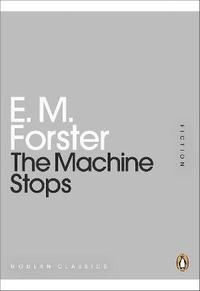 av E M Forster
(3 röster)  |  Läs 1 recension
Häftad Engelska, 2011-02-15
43
Köp
Spara som favorit
Finns även som
Visa alla 8 format & utgåvor
'"You talk as if a god had made the Machine," cried the other. "I believe that you pray to it when you are unhappy. Men made it, do not forget that."' E.M. Forster is best known for his exquisite novels, but these two affecting short stories brilliantly combine the fantastical with the allegorical. In 'The Machine Stops', humanity has isolated itself beneath the ground, enmeshed in automated comforts, and in 'The Celestial Omnibus' a young boy takes a trip his parents believe impossible. This book contains The Machine Stops and A Celestial Omnibus.
Visa hela texten

Edward Morgan Forster (1879-1970) was educated at King's College, Cambridge, with whom he had a lifelong connection. He was elected to an Honorary Fellowship in 1946. He wrote six novels - Where Angels Fear to Tread (1905), The Longest Journey (1907), A Room with a View (1908), Howards End (1910), A Passage to India (1924), which won both the Prix Femina Vie Heureuse and the James Tait Black Memorial Prize. Maurice , written in 1914, was published posthumously in 1971. He also published two volumes of short stories; two collections of essays; a critical work (Aspects of the Novel); The Hill of Devi; two biographies; two books about Alexandria; and the libretto for Britten's opera Billy Budd. He died in 1970. In his obituary The Times called him 'one of the most esteemed English novelists of his time'.