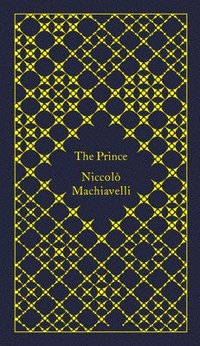 av Niccolo MacHiavelli
(2 röster)
Inbunden Engelska, 2014-11-06
111
Köp
Spara som favorit
Finns även som
Visa alla 10 format & utgåvor
Niccolo Machiavelli's brutally uncompromising manual of statecraft, The Prince is translated and edited with an introduction by Tim Parks in Penguin Classics. As a diplomat in turbulent fifteenth-century Florence, Niccolo Machiavelli knew how quickly political fortunes could rise and fall. The Prince, his tough-minded, pragmatic handbook on how power really works, made his name notorious and has remained controversial ever since. How can a leader be strong and decisive, yet still inspire loyalty in his followers? When is it necessary to break the rules? Is it better to be feared than loved? Examining regimes and their rulers the world over and throughout history, from Roman Emperors to renaissance Popes, from Hannibal to Cesare di Borgia, Machievalli answers all these questions in a work of realpolitik that still has shrewd political lessons for today. Tim Parks's acclaimed contemporary translation renders Machiavelli's no-nonsense original as alarming and enlightening as when it was first written. His introduction discusses Machiavelli's life and reputation, and explores the historical background to the work. Niccolo Machiavelli (1469-1527) was born in Florence, and served the Florentine republic as a secretary and second chancellor, as ambassador and foreign policy-maker. When the Medici family returned to power in 1512 he was suspected of conspiracy, imprisoned and tortured and forced to retire from public life. His most famous work, The Prince, was written in an attempt to gain favour with the Medicis and return to politics. If you enjoyed The Prince, you might like Plato's Republic, also available in Penguin Classics. 'A gripping work, and a gripping translation' Nicholas Lezard, Guardian 'Tim Parks's swift and supple new translation brings out all its chilling modernity' Boyd Tonkin, Independent
Visa hela texten

"[Machiavelli] can still engage our attention with remarkable immediacy, and this cannot be explained solely by the appeal of his ironic observations on human behaviour. Perhaps the most important thing is the way he can compel us to reflect on our own priorities and the reasoning behind them; it is this intrusion into our own defenses that makes reading him an intriguing experience. As a scientific exponent of the political art Machiavelli may have had few followers; it is as a provocative rhetorician that he has had his real impact on history." -from the Introduction by Dominic Baker-Smith

Niccolo Machiavelli was born in Florence in 1469 of an old citizen family. In 1498 he was appointed secretary and a second chancellor to the Florentine Republic. During his time of office he accompanied Julius II on his first campaign of conquest. In 1507, as chancellor of the newly appointed Nove di Milizia, he organised an infantry force which fought at the capture of Pisa in 1509. Three years later it was defeated by the Holy League at Prato, the Medici returned to Florence, and Machiavelli was excluded from public life. He retired to his farm near San Casciano, where he gave his time to study and writing. After a brief return to public life, he died in 1527. Tim Parks moved to Italy in 1981 and lives in Milan. Well known for his non-fiction writings on Italy - Italian Neighbours, An Italian Education - and his novels - Europa (shortlisted for the Booker Prize), Destiny, In Extremis - he has translated a number of Italian writers, in particular Macchiavelli, Leopardi, Moravia, Calvino, Tabucchi and Calasso. He has twice been awarded the John Florio Prize for Translation from the Italian.