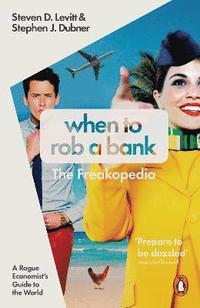 When to Rob a Bank

A Rogue Economist's Guide to the World

av Steven D Levitt, Stephen J Dubner
Häftad Engelska, 2016-05-26
123
Köp
Spara som favorit
Finns även som
Visa alla 1 format & utgåvor
This is the ultimate guide to the world of the Freak. Renegade thinkers and bestselling sensations Levitt and Dubner have carefully curated the very best of their blogs, conversations, wisecracks and advice from the last decade to reveal the outlandish truth about everything from lying to bankrobbing, fast food to sex taxes. 'We are all Freakonomists now' Washington Post 'A phenomenon ... their approach has won them a cult following' Observer 'Lie back and let Levitt and Dubner's bouncy prose style carry you along from one peculiarity to the next' Sunday Telegraph 'You are guaranteed a good time' Financial Times
Visa hela texten

Steven D. Levitt (Author) Steven D. Levitt, a professor of economics at the University of Chicago, was awarded the John Bates Clark medal, given to the most influential American economist under the age of forty. He is also a founder of The Greatest Good, which applies Freakonomics-style thinking to business and philanthropy. Stephen J. Dubner (Author) Stephen J. Dubner is an award-winning author, journalist, and radio and TV personality. He quit his first career - as an almost-rock-star - to become a writer. He has worked for The New York Times and published three non-Freakonomics books. He lives with his family in New York City.