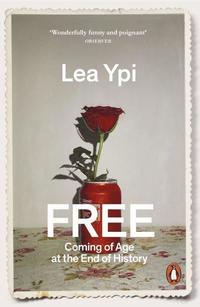 Coming of Age at the End of History

av Lea Ypi
Häftad Engelska, 2022-06-01
140
Köp
Spara som favorit
Finns även som
Visa alla 2 format & utgåvor
THE SUNDAY TIMES BESTSELLER WINNER OF THE ONDAATJE PRIZE 'The best book I read last year by a mile. . . so beautifully written that anyone would be hooked' Laura Hackett, Sunday Times, Best Summer Books 'Wonderfully funny and poignant. . . a tale of family secrets and political awakening amid a crumbling regime' Luke Harding, Observer 'We never lose our inner freedom; the freedom to do what is right' Lea Ypi grew up in one of the most isolated countries on earth, a place where communist ideals had officially replaced religion. Albania, the last Stalinist outpost in Europe, was almost impossible to visit, almost impossible to leave. It was a place of queuing and scarcity, of political executions and secret police. To Lea, it was home. People were equal, neighbours helped each other, and children were expected to build a better world. There was community and hope. Then, in December 1990, everything changed. The statues of Stalin and Hoxha were toppled. Almost overnight, people could vote freely, wear what they liked and worship as they wished. There was no longer anything to fear from prying ears. But factories shut, jobs disappeared and thousands fled to Italy on crowded ships, only to be sent back. Predatory pyramid schemes eventually bankrupted the country, leading to violent conflict. As one generation's aspirations became another's disillusionment, and as her own family's secrets were revealed, Lea found herself questioning what freedom really meant. Free is an engrossing memoir of coming of age amid political upheaval. With acute insight and wit, Lea Ypi traces the limits of progress and the burden of the past, illuminating the spaces between ideals and reality, and the hopes and fears of people pulled up by the sweep of history. THE SUNDAY TIMES MEMOIR OF THE YEAR WINNER OF THE SLIGHTLY FOXED BEST FIRST BIOGRAPHY PRIZE SHORTLISTED FOR THE COSTA BIOGRAPHY AWARD SHORTLISTED FOR THE BAILLIE GIFFORD PRIZE FOR NON-FICTION SHORTLISTED FOR THE GORDON BURN PRIZE CHOSEN AS A BOOK OF THE YEAR BY THE GUARDIAN, FINANCIAL TIMES, SUNDAY TIMES, TLS, DAILY MAIL, NEW STATESMAN AND SPECTATOR
Visa hela texten

If you read one memoir this year, let it be this * Sunday Times, Books of the Year * A magical, timeless and important account of what life was really like under communism. Free brims with diamond-studded details, it lays bare the compromises, fear and betrayals of a secret police state, but is also an uplifting and humorous reminder of how much the human spirit can endure -- Alec Russell * Financial Times * Lea Ypi's Free is the first book since Elena Ferrante's My Brilliant Friend that I have pressed on family, friends and colleagues, insisting they read it. . . a truly riveting memoir and a profound meditation on what it means to be free -- Ruth Scurr * Spectator, Books of the Year * Enthralling. . . a classic in the making -- David Abulafia * TLS, Books of the Year * Ypi's deliciously smart memoir of her Albanian girlhood at the end of the Cold War is a brilliant disquisition on the meanings of freedom - its lures, false hopes, disappointments and possibilities - in our time -- Lyndsey Stonebridge * New Statesman, Books of the Year * A tart and tender childhood memoir. But also a work of social criticism, and a meditation on how to live with purpose. . . A quick read, but like Marx's spectre haunting Europe, it stays with you * The New Yorker, Best Books of 2021 * An absorbing memoir of Ypi's Albanian childhood and its ideological delusions. The freedom she discovers is far more complex than we might expect -- Terri Apter * TLS, Books of the Year * A strange world and its legacy is now stunningly brought to life. Lea Ypi offers a moving and compelling memoir of growing up in turbulent times, as well as a frank questioning of what it really means to be "free" -- Frederick Studemann * Financial Times, Books of the Year * Lea Ypi's Free: Coming of Age at the End of History is a beautifully written account of life under a crumbling Stalinist system in Albania and the shock and chaos of what came next. In telling her story and examining the political systems in which she was raised, the author and LSE professor asks tough questions about the nature of freedom * Guardian, Books of the Year * An astonishing and deeply resonant memoir about growing up in the last days of the last Stalinist outpost of the 20th century. . . What makes it so unforgettable is that we see this world, one about which we know so little, through the eyes of a child.. . It is more fundamentally about humanity, and about the confusions and wonders of childhood. Ypi weaves magic in this book: I was entranced from beginning to end -- Laura Hackett * Sunday Times * Utterly engrossing . . . Ypi's memoir is brilliantly observed, politically nuanced and - best of all - funny. An essential book, just as much for Britons as Albanians -- Stuart Jeffries * Guardian * Riveting. . . A wonderfully funny and poignant portrait of a small nation in a state of collapse. . . gloriously readable. . . One of the nonfiction titles of the year, it is destined for literary accolades and popular success -- Luke Harding * Observer * Gripping. A book of political reality as lived from day to day by a young girl coming of age. It shows what can arrive all too easily in the void left by a suddenly discarded political system. Unforgettable * Daily Mail * A wonderful memoir. . . a uniquely engaging and illuminating account of a young life during a period of intense turmoil. So readable, yet Ypi does not sacrifice profound observations about politics and culture. Detailing the absurdities of the regime from a child's perspective, she pulls off the remarkable feat of emphasizing their cruelty with a light and often humorous touch -- Misha Glenny * TLS * Fantastically engaging. . . A breakout book. . . Such an engrossing story that it is (almost) unsurprising that it is already being translated into eleven languages. If a film follows, don't be surprised -- Tim Judah * Financial Times * Five stars. . . deserves to be added to the history curriculum * Daily Telegraph * Lea Ypi's e

Lea Ypi is a professor of Political Theory at the London School of Economics. Her first trade book, Free won the Ondaatje Prize and the Slightly Foxed Best First Biography Prize and was shortlisted for the Baillie Gifford Prize and the Costa Biography Award. It is being translated into twenty languages.