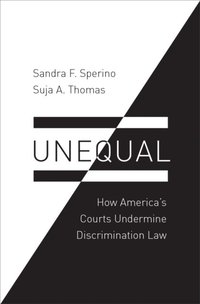 av Sandra F Sperino, Suja A Thomas
E-bok (EPUB - DRM), Engelska, 2017-05-01
329
Ladda ned
Spara som favorit
Laddas ned direkt
Läs i vår app för iPhone, iPad och Android
Finns även som
Visa alla 2 format & utgåvor
It is no secret that since the 1980s, American workers have lost power vis--vis employers through the well-chronicled steep decline in private sector unionization. American workers have also lost power in other ways. Those alleging employment discrimination have fared increasingly poorly in the courts. In recent years, judges have dismissed scores of cases in which workers presented evidence that supervisors referred to them using racial or gender slurs. In one federal district court, judges dismissed more than 80 percent of the race discrimination cases filed over a year. And when juries return verdicts in favor of employees, judges often second guess those verdicts, finding ways to nullify the jury's verdict and rule in favor of the employer. Most Americans assume that that an employee alleging workplace discrimination faces the same legal system as other litigants. After all, we do not usually think that legal rules vary depending upon the type of claim brought. The employment law scholars Sandra A. Sperino and Suja A. Thomas show in Unequal that our assumptions are wrong. Over the course of the last half century, employment discrimination claims have come to operate in a fundamentally different legal system than other claims. It is in many respects a parallel universe, one in which the legal system systematically favors employers over employees. A host of procedural, evidentiary, and substantive mechanisms serve as barriers for employees, making it extremely difficult for them to access the courts. Moreover, these mechanisms make it fairly easy for judges to dismiss a case prior to trial. Americans are unaware of how the system operates partly because they think that race and gender discrimination are in the process of fading away. But such discrimination still happens in the workplace, and workers now have little recourse to fight it legally. By tracing the modern history of employment discrimination, Sperino and Thomas provide an authoritative account of how our legal system evolved into an institution that is inherently biased against workers making rights claims.
Visa hela texten