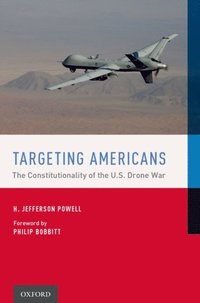 The Constitutionality of the U.S. Drone War

av H Jefferson Powell, Philip C Bobbitt
E-bok (EPUB - DRM), Engelska, 2016-03-16
419
Ladda ned
Spara som favorit
Laddas ned direkt
Läs i vår app för iPhone, iPad och Android
Finns även som
Visa alla 2 format & utgåvor
Targeting Americans: The Constitutionality of the U.S. Drone War focuses on the legal debate surrounding drone strikes, the use of which has expanded significantly under the Obama Presidency as part of the continuing war against terror. Despite the political salience of the legal questions raised by targeted killing, the author asserts that there has been remarkably little careful analysis of the fundamental legal question: the constitutionality of the policy. From a position of deep practical expertise in constitutional issues, Prof. Powell provides a dispassionate and balanced analysis of the issues posed by U.S. targeted killing policy, using the killing of Anwar al-Awlaki in September 2011 as a focus for discussion. While Powell concludes that the al-Awlaki strike was constitutional under 2001 legislation, he rejects the Obama administration's broader claims of authority for its drone policies. Furthermore, he argues, citizens acting as combatants in al-Qaeda and associated groups are not entitled to due process protections: by due process standards, the administration's procedures are legally inadequate. A fundamental theme of the book is that the conclusion that an action or policy is constitutional should not be confused with claims about its wisdom, morality, or legality under international norms. Part of the purpose of constitutional analysis is to draw attention to these other normative concerns and not, as is too often the case, to occlude them.
Visa hela texten