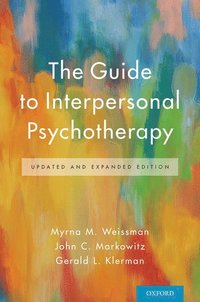 The Guide to Interpersonal Psychotherapy

Myrna M. Weissman, PhD, is Diane Goldman Kemper Family Professor of Epidemiology and Psychiatry, College of Physicians and Surgeons and the Mailman School of Public Health at Columbia University and Chief of the Division of Epidemiology at New York State Psychiatric Institute (NYSPI). She received her PhD in Epidemiology from Yale University School of Medicine where she also became a professor. Early on in her career she began working with Gerald Klerman at Yale University on the development of IPT. Together they carried out this work, testing IPT in several clinical trials of maintenance and acute treatment of depression and modification for primary care they called Interpersonal Counseling. They published the first IPT manual in 1984. <p/> John C. Markowitz, MD, received his medical degree from Columbia University and did his residency training in psychiatry at the Payne Whitney Clinic of Cornell Medical Center, where he was trained in interpersonal psychotherapy (IPT) by the late Gerald L. Klerman. First at Cornell and then at Columbia University/New York State Psychiatric Institute, Dr. Markowitz has conducted comparative studies of IPT, other psychotherapies, and medications, studying mood, anxiety, and personality disorders. He has received numerous grants from the National Institute of Mental Health and other organizations, has published several hundred articles and book chapters, and has taught and supervised IPT around the world. <p/> Gerald L. Klerman, MD, was mentor of Dr. Weissman (his wife) and Dr. Markowitz. He was convinced that interpersonal relationships importantly influenced the course and recurrence of illness, and that psychotherapy could potentially stabilize interpersonal relations. Gerry was the force behind the original ideas in the first Interpersonal Psychotherapy (IPT) manual (Klerman et al., 1984) and many of its adaptations. Gerry died young in April 1992. Even years after his death, his writing on IPT is pervasive. Gerry held numerous prestigious positions in psychiatry and government. He graduated from New York University Medical School and did his residency at Harvard. He was professor at Yale University, Harvard Medical School and lastly, Weill Medical College of Cornell University. He was appointed by President Carter to lead the Alcohol, Drug Abuse, and Mental Health Administration, a position he held between 1977 and 1980.