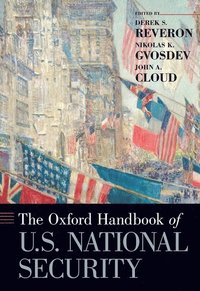 Derek S. Reveron is a Professor of National Security Affairs at the U.S. Naval War College. He specializes in strategy development, non-state security challenges, and defense policy. He has authored or edited twelve books and is a faculty affiliate at the Belfer Center for Science and International Affairs at Harvard Kennedy School. He received an M.A. in political science and a Ph.D. in public policy analysis from the University of Illinois at Chicago. Nikolas K. Gvosdev is Professor of National Security Affairs at the U.S. Naval War College and the Jerome E. Levy Chair for Economic Geography and National Security. He was the Editor of The National Interest magazine, a Senior Fellow of Strategic Studies at The Nixon Center in Washington, D.C., and is currently a senior fellow with the Foreign Policy Research Institute. He received his Ph.D. from St Antony's College, Oxford University, where he studied on a Rhodes Scholarship. Ambassador John A. Cloud is a Professor of National Security Affairs and the William B. Ruger Chair of National Security Economics at the U.S. Naval War College. As a retired career diplomat, he is a specialist in European and economic issues who served as U.S. Ambassador to the Republic of Lithuania, Deputy Chief of Mission at the United States Embassy in Berlin, Germany, on the National Security Council staff, and other Foreign Service assignments in Belgium, Germany, Poland and Mexico. Mr. Cloud received his B.A. from the University of Connecticut in 1975, and a M.A. in International Affairs from George Washington University in 1977.