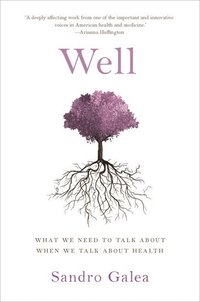 A deeply affecting work that is at once rigorous and person, Well examines the subtle and not-so-subtle factors that determine who gets to be healthy in America.

Sandro Galea argues that the country's failing health is a product of the society and culture Americans have built for ourselves not just in lifestyle, but in the separations entrenched across the spectrum of American experience.
Visa hela texten


"A deeply affecting work from one of the important and innovative voices in American health and medicine. Well shows how healthcare and society are reflections of one another and how central human qualities like empathy and compassion must be if both are going to thrive." Arianna Huffington, Founder of HuffPost and Founder & CEO of Thrive Global

Sandro Galea, MD, DrPH, is Dean and Robert A. Knox Professor at the Boston University School of Public Health. He is a physician and epidemiologist who has previously held academic and leadership positions at Columbia University, University of Michigan, and the New York Academy of Medicine. He has published more than 750 scientific journal articles, 50 chapters, and 13 books, and his research has been featured extensively in current periodicals and newspapers. Galea holds a medical degree from the University of Toronto and graduate degrees from Harvard University and Columbia University. Galea was named one of Time's epidemiology innovators and has been listed as one of the "World's Most Influential Scientific Minds" by Thomson Reuters.