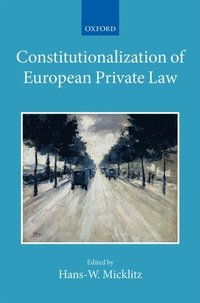 av Hans Micklitz
E-bok (PDF - DRM), Engelska, 2014-04-17
1209
Ladda ned
Spara som favorit
Laddas ned direkt
Läs i vår app för iPhone, iPad och Android
Finns även som
Visa alla 2 format & utgåvor
In recent years the impact of human rights and fundamental rights on private law has risen in prominence and led to a whole series of detailed investigations. 'Constitutionalization of private law' is the flag under which most of the research on the increasing impact of national constitutional rights on national private legal orders is sailing. In the absence of a European Constitution, the constitutionalization of European private law suggests a process: constitutionalization instead of constituent power, demos, and the magic constitutional moment. The Charter of Fundamental Rights and the European Convention of Human Rights constitute the two pillars on which the transformation of European private law rests. This volume clearly demonstrates the change that has taken place, at the national and at the European level. Private law is no longer immune to the intrusion of fundamental and human rights. Whilst member states and the EU are driving the process by adopting ever more concrete and more comprehensive lists of human and fundamental rights, at the national, the European, and international level with overlapping contents, the true and key players in this development are the national and Europeancourts. Contributions to this volume give this process a face and a direction, which is highlighted in the introduction by Hans-W. Micklitz.
Visa hela texten