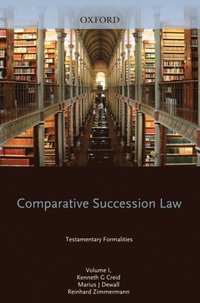 av Kenneth G C Reid, Marius J De Waal, Reinhard Zimmermann
E-bok (PDF - DRM), Engelska, 2011-10-06
1949
Ladda ned
Spara som favorit
Laddas ned direkt
Läs i vår app för iPhone, iPad och Android
Finns även som
Visa alla 1 format & utgåvor
Launching a major new research project examining the principles of succession law in comparative perspective, this book discusses the formalities which the law imposes in order for a person to make a testamentary disposal of property. Among the questions considered are the following. How are wills made? What precisely are the rules - as to the signature of the testator, the use of witnesses, the need for a notary public or lawyer, and so on? Is there is a choice ofwill-type and, if so, which type is used most often and what are the advantages and disadvantages of each? How common is will-making or do most people die intestate? What happens if formalities are not observed? How can requirements of form be explained and justified? How did the law develophistorically, what is the state of the law today, and what are the prospects for the future?The focus is on Europe, and on countries which have been influenced by the European experience. Thus in addition to giving a detailed treatment of the law in Austria, Belgium, England and Wales, France, Germany, Hungary, Italy, the Netherlands, Poland, and Spain, the book explores legal developments in Australia, New Zealand, the United States of America, and in some of the countries of Latin America with a particular emphasis on Brazil. It also includes chapters on two of the mixedjurisdictions - Scotland and South Africa - and on Islamic Law. The book opens with chapters on Roman law and on the early modern law in Europe, thus setting the historical scene as well as anticipating and complementing the accounts of national history which appear in subsequent chapters; and it concludes withan assessment of the overall development of the law in the countries surveyed, and with some wider reflections on the nature and purpose of testamentary formalities.
Visa hela texten