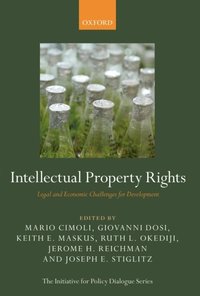 Legal and Economic Challenges for Development

av Mario Cimoli, Giovanni Dosi, Keith E Maskus, Ruth L Okediji, Jerome H Reichman
E-bok (PDF - DRM), Engelska, 2014-05-08
429
Ladda ned
Spara som favorit
Laddas ned direkt
Läs i vår app för iPhone, iPad och Android
Finns även som
Visa alla 1 format & utgåvor
In recent years, Intellectual Property Rights - both in the form of patents and copyrights - have expanded in their coverage, the breadth and depth of protection, and the tightness of their enforcement. Moreover, for the first time in history, the IPR regime has become increasingly uniform at international level by means of the TRIPS agreement, irrespectively of the degrees of development of the various countries. This volume, first, addresses from different angles the effects of IPR on the processes of innovation and innovation diffusion in general, and with respect to developing countries in particular. Contrary to a widespread view, there is very little evidence that the rates of innovation increase with the tightness of IPR even in developed countries. Conversely, in many circumstances, tight IPR represents an obstacle to imitation and innovation diffusion in developing countries. What can policies do then? This is the second major theme of the book which offers several detailed discussions of possible policy measures even within the current TRIPS regime - including the exploitation of the waivers to IPR enforcement that it contains, various forms of development of 'technological commons', and non-patent rewards to innovators, such as prizes. Some drawbacks of the regimes, however, are unavoidable: hence the advocacy in many contributions to the book of deep reforms ofthe system in both developed and developing countries, including the non-patentability of scientific discoveries, the reduction of the depth and breadth of IPR patents, and the variability of the degrees of IPR protection according to the levels of a country's development.
Visa hela texten