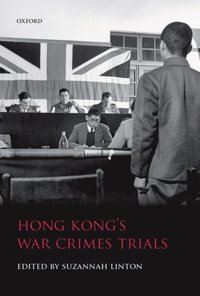 av Suzannah Linton
E-bok (PDF - DRM), Engelska, 2013-09-26
878
Ladda ned
Spara som favorit
Laddas ned direkt
Läs i vår app för iPhone och iPad
Finns även som
Visa alla 2 format & utgåvor
In the aftermath of the Second World War, the British military held 46 trials in Hong Kong in which 123 defendants, from Japan and Formosa (Taiwan), were tried for war crimes. This book provides the first comprehensive legal analysis of these trials. The subject matter of the trials spanned war crimes committed during the fall of Hong Kong, its occupation, and in the period after the capitulation following the nuclear bombings of Hiroshima and Nagasaki, but beforethe formal surrender. They included killings of hors de combat, abuses in prisoner-of-war camps, abuse and murder of civilians during the military occupation, forced labour, and offences on the High Seas. The events adjudicated included those from Hong Kong, China, Japan, the High Seas, and Formosa(Taiwan). Taking place in the same historical period as the more famous Nuremberg and Tokyo trials, the Hong Kong war crimes trials provide key insights into events of the time, and the development of international criminal law and procedure in this period. A team of experts in international criminal law examine these trials in detail, placing them in their historical context, investigating how the courts conducted their proceedings and adjudicated acts alleged to be war crimes, and evaluating the extent to which the Hong Kong trials contributed to the development of contemporary issues, such as joint criminal enterprise and superior orders. There is also comparative analysis with contemporaneous proceedings, such as the Australian War Crimestrials, trials in China, and those conducted by the British in Singapore and Germany, placing them within the wider history of international justice. This book is essential reading for anyone interested in the development of international criminal law and procedure.
Visa hela texten