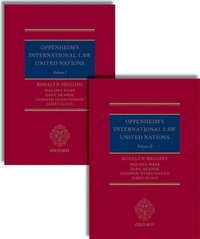 av Rosalyn Higgins, Philippa Webb, Dapo Akande, Sandesh Sivakumaran, James Sloan
E-bok (PDF - DRM), Engelska, 2018-12-13
5459
Ladda ned
Spara som favorit
Laddas ned direkt
Läs i vår app för iPhone, iPad och Android
Finns även som
Visa alla 1 format & utgåvor
The United Nations, whose specialized agencies were the subject of an Appendix to the 1958 edition of Oppenheim's International Law: Peace, has expanded beyond all recognition since its founding in 1945.This volume represents a study that is entirely new, but prepared in the way that has become so familiar over succeeding editions of Oppenheim. An authoritative and comprehensive study of the United Nations' legal practice, this volume covers the formal structures of the UN as it has expanded over the years, and all that this complex organization does. All substantive issues are addressed in separate sections, including among others, the responsibilities of the UN, financing, immunities, human rights, preventing armed conflicts and peacekeeping, and judicial matters. In examining the evolving structures and ever expanding work of the United Nations, this volume follows the long-held tradition of Oppenheim by presenting facts uncoloured by personal opinion, in a succinct text that also offers in the footnotes a wealth of information and ideas to be explored. It is book that, while making all necessary reference to the Charter, the Statute of the International Court of Justice, and other legal instruments, tells of the realities of the legal issues as theyarise in the day to day practice of the United Nations. Missions to the UN, Ministries of Foreign Affairs, practitioners of international law, academics, and students will all find this book to be vital in their understanding of the workings of the legal practice of the UN. Research for this publication was made possible by The Balzan Prize, which was awarded to Rosalyn Higgins in 2007 by the International Balzan Foundation.
Visa hela texten