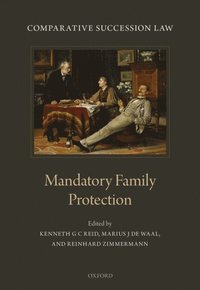 av Kenneth G C Reid, Marius J De Waal, Reinhard Zimmermann
E-bok (EPUB - DRM), Engelska, 2020-10-09
1819
Ladda ned
Spara som favorit
Laddas ned direkt
Läs i vår app för iPhone, iPad och Android
Finns även som
Visa alla 1 format & utgåvor
This third volume in a series on Comparative Succession Law concerns the entitlement of family members to override the provisions of a deceased person's will to obtain money or assets (or more money or assets) from the person's estate. Some countries, notably those in the civil law tradition (such as France or Germany), confer a pre-ordained share of the deceased's estate or of its value on certain members of the deceased's family, and especially on the deceased'schildren and spouse. Other countries, notably those in the common law tradition (such as England, Canada, or Australia), leave the matter to the discretion of the court, the amount awarded depending primarily on financial need. Whichever form it takes, mandatory family provision is both a protectionagainst disinheritance and also, therefore, a restriction on testamentary freedom. The volume focuses on Europe and on countries influenced by the European experience. In addition to detailed treatment of the law in Austria, England and Wales, France, Germany, Hungary, Italy, the Netherlands, Norway, Poland, Scotland, and Spain, the book also has chapters on Australia and New Zealand, South Africa, the United States, Canada, the countries of Latin America, and the People's Republic of China. Some other countries are covered more briefly, and there is a separate chapter onIslamic law. The book opens with accounts of Roman law and of the law in medieval and early-modern Europe, and it concludes with a comparative assessment of the law as it is today in the countries and legal traditions surveyed in this volume.
Visa hela texten