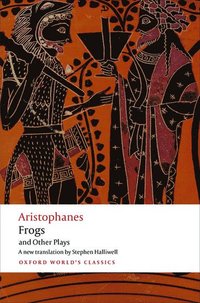 Aristophanes: Frogs and Other Plays

A new verse translation, with introduction and notes

Colin McDonald, Classics for All It would be hard to find a better companion to Aristophanes, for classicists but perhaps especially for the general reader Altogether a fine effort, to be recommended for all classes of reader.


The Classical Journal Halliwell pairs his fluency in rendering verse with deftness at capturing the complexities of Aristophanes' language, which gives his translations particular verve.

Stephen Halliwell is Professor of Greek and Wardlaw Professor of Classics at the University of St Andrews. He has taught in the universities of Oxford, London, Cambridge, and Birmingham, and held visiting professorships in Belgium, Canada, Italy, and the USA. His extensive publications on Greek literature, philosophy, and culture include two prize-winning books: Greek Laughter: A Study of Cultural Psychology from Homer to Early Christianity (Criticos Prize 2008), and The Aesthetics of Mimesis: Ancient Texts and Modern Problems (Premio Europeo d'Estetica, 2008). His book Between Ecstasy and Truth: Interpretations of Greek Poetics from Homer to Longinus was published by Oxford University Press in 2011. He is a Fellow of both the British Academy and the Royal Society of Edinburgh.