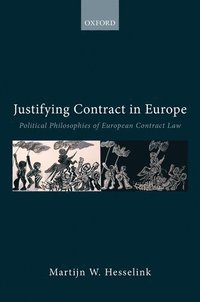 
Hanoch Dagan, Stewart and Judy Colton Professor of Legal Theory and Innovation, Tel Aviv University Justifying Contract in Europe is a tour de force of scholarship and research. Against the range of current normative theories of contract, Hesselink develops an innovative radically-democratic account of European contract law. Broad in scope and full of insights, this thought-provoking book would be invaluable for anyone serious about contract law or about European law.


Aditi Bagchi, Professor of Law, Fordham University School of Law Few scholars of contract have the philosophical depth and breadth that it takes to write a book like this. Most of us work within a single normative framework without attempting to defend it to those operating from rival first principles. Martijn W. Hesselink puts leading philosophical theories in conversation with each other, asking how each answers foundational questions about contract law. He reveals that disagreements about contract law are not shallow.
Disagreement reflects divergent political principles, not simple confusion, parochialism, or empirical uncertainty. In democracies, we are compelled to take these disagreements seriously and work toward a law of contract grounded in overlapping consensus. Hesselink orients us toward and within that important
work.


Marietta Auer, Director, Max Planck Institute for Legal History and Legal Theory, Frankfurt am Main This brilliant book offers no less than a comprehensive account of the six most potent philosophies of contract law. The author systematically applies libertarianism, utilitarianism, communitarianism, liberal-egalitarianism, civic republicanism, and discourse theory to the most pressing issues of contract law and contract theory. The book is a must-read for all contract scholars.


Rainer Forst, Professor of Political Theory and Philosophy, Goethe University Frankfurt, author of Normativity and Power (OUP) In his magnum opus, Martijn W. Hesselink revolutionizes the way we think about European contract law beyond positivism, methodological nationalism, and economic reductionism. He argues forcefully that contract law should be regarded as part of a transnational social and political basic structure that aims to promote justice and democracy, starting from where we are and pointing to what we could be. A great achievement.

Martijn W Hesselink has been Professor of Transnational Law and Theory at the European University Institute in Florence since 2019. Prior to joining the EUI, he was Professor of European Private Law at the University of Amsterdam, where he was also the founding Director of the Centre for the Study of European Contract Law. Professor Hesselink is an editor of the European Review of Contract Law. He served as a member of the European Commission's expert group on European contract law and presented several reports on matters of contract and consumer law for the European Parliament. He has published on a variety of subjects in the fields of European private law and private law theory.