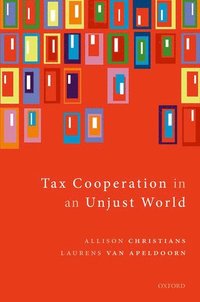 Tax Cooperation in an Unjust World

Allison Christians is the H. Heward Stikeman Chair in Tax Law at McGill University, where she researches national and international tax law and policy. She focuses specifically on the relationship between taxation and economic development, as well as the role of institutions in the creation of tax policy norms. Before her academic career, she practiced tax law at Wachtell, Lipton, Rosen & Katz and Debevoise & Plimpton in New York. She has been named one of the Global Tax 50 most influential individuals in international taxation. Laurens van Apeldoorn is Assistant Professor of Constitutional Law and Legal Theory at the Open University, the Netherlands. His work on the intersection of law and philosophy is part of the research programme Transformative Effects of Globalisation in Law, funded by the Dutch Ministry of Education. Before joining the Open University, he was Assistant Professor of Philosophy at Leiden University. He has been O'Brien Fellow in Residence at the Centre for Human Rights and Legal Pluralism, McGill University, and Visiting Professor at the Centre for Ethics, University of Toronto.