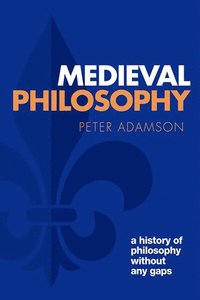 A history of philosophy without any gaps, Volume 4

av Peter Adamson
Häftad Engelska, 2022-01-27
137
Köp
Spara som favorit
Finns även som
Visa alla 3 format & utgåvor
Adamsom offers a lively and accessible tour through 600 years of intellectual history, offering a feast of new ideas in every area of philosophy. He introduces us to some of the greatest thinkers of the Western tradition including Abelard, Anselm, Aquinas, Hildegard of Bingen, and Julian of Norwich.
Visa hela texten

Alban McCoy, The Tablet, Books of the Year 2019 Accessible and comprehensive.


Sara L. Uckelman, Philosophical Quarterly a volume that despite its weight and heftone could easily give to a non-philosopher as a first introduction to the field. For even the most obscure authors (such as that most prolific of medieval philosophers, Anon) and the most arcane of topics comes to life under Adamson's magic touch. But what is most impressive about the book is its sheer scope of knowledge. . . . If you want a good, light-touch, yet still not glossing over the difficulties,
introduction to medieval philosophy, this is the book for you.


Peter Costello, The Irish Catholic Let me say at once on the evidence of this volume, [Adamson] succeeds brilliantly. Over some 78 sections he covers a huge range of figures ... Special attention is given - and rightly so - to female philosophers, such as Catherine of Siena ... This book (and the others in the series), which are a delight to read, will be of great interest to general readers, aside from students of culture.


Nick Mattiske, Journey, Isolation Reading Recommendations Adamson writes with a light style, beginning each short chapter with an anecdote, which rewards both sticking with the long narrative and dipping in and out.


Paradigm Explorer A staggering philosophical achievement ... the clarity of the animated text is further enhanced by the authors humour, bringing a light touch to complex matters ... This volume will surely attain classic status, and can be read either sequentially or consulted as a detailed encyclopaedia of mediaeval philosophy and its variegated personalities.

Peter Adamson took his doctorate from the University of Notre Dame and first worked at King's College London. In 2012 he moved to the Ludwig-Maximilians-Universitat Munchen, where he is Professor of Late Ancient and Arabic Philosophy. He has published widely in ancient and medieval philosophy, especially on Neoplatonism and on philosophy in the Islamic world.

Preface Early Medieval Philosophy 1: Arts of Darkness: Introduction to Medieval Philosophy 2: Charles in Charge: Alcuin and the Carolingian Period 3: Grace Notes: Eriugena and the Predestination Controversy 4: Much Ado About Nothing: Eriugena's Periphyseon 5: Philosophers Anonymous: The Roots of Scholasticism 6: Virgin Territory: Peter Damian on Changing the Past 7: A Canterbury Tale: Anselm's Life and Works 8: Somebody's Perfect: Anselm's Ontological Argument 9: All or Nothing: The Problem of Universals 10: Get Thee to a Nunnery: Heloise and Abelard 11: It's the Thought that Counts: Abelard's Ethics 12: Learn Everything: The Victorines 13: Like Father, Like Son: Debates over the Trinity 14: On the Shoulders of Giants: Philosophy at Chartres 15: The Good Book: Philosophy of Nature 16: One of a Kind: Gilbert of Poitiers on Individuation 17: Two Swords: Early Medieval Political Philosophy 18: Law and Order: Peter Lombard and Gratian 19: Leading Light: Hildegard of Bingen 20: Rediscovery Channel: Translations into Latin 21: Straw Men: The Rise of the Universities The Thirteenth Century 22: No Uncertain Terms: Thirteenth Century Logic 23: Full of Potential: Thirteenth Century Physics 24: Stayin' Alive: Thirteenth Century Psychology 25: It's All Good: The Transcendentals 26: Do the Right Thing: Thirteenth Century Ethics 27: A Light That Never Goes Out: Robert Grosseteste 28: Origin of Species: Roger Bacon 29: Stairway to Heaven: Bonaventure 30: Your Attention Please: Peter Olivi 31: None for Me, Thanks: Franciscan Poverty 32: Begin the Beguine: Hadewijch and Mechtild 33: Binding Arbitration: Robert Kilwardby 34: Animal, Vegetable, Mineral: Albert the Great's Natural Philosophy 35: The Shadow Knows: Albert the Great's Metaphysics 36: The Ox Heard Round the World: Thomas Aquinas 37: Everybody Needs Some Body: Aquinas on Soul and Knowledge 38: What Comes Naturally: Ethics in Albert and Aquinas 39: What Pleases the Prince: The Rule of Law 40: Onward Christian Soldiers: Just War Theory 41: Paris When it Sizzles: The Condemnations 42: Masters of the University: "Latin Averroism" 43: The Neverending Story: The Eternity of the World 44: Let Me Count the Ways: Speculative Grammar 45: Love, Reign Over Me: the Romance of the Rose 46: Frequently Asked Questions: Henry of Ghent 47: Here Comes the Son: The Trinity and the Eucharist 48: Once and for All: Scotus on Being 49: To Will or Not to Will: Scotus on Freedom 50: On Command: Scotus' Ethics 51: One in a Million: Scotus on Universals and Individuals The Fourteenth Century 52: Time of the Signs: the Fourteenth Century 53: After Virtue: Marguerite Porete 54: To Hell and Back: Dante Alighieri 55: Church and State: Theories of Political Authority 56: Keeping the Peace: Marsilius of Padua 57: Do As You're Told: Ockham on Ethics and Political Philosophy 58: A Close Shave: Ockham's Nominalism 59: What Do You Think? Ockham on Mental Language 60: Keeping it Real: Responses to Ockham 61: Back to the Future: Divine Foreknowledge 62: Trivial Pursuits: Fourteenth Century Logic 63: Quadrivial Pursuits: the Oxford Calculators 64: Get to the Point: Fourteenth Century Physics 65: Portrait of the Artist: John Buridan 66: Seeing is Believing: Nicholas of Autrecourt's Skepticism 67: On the Money: Medieval Economic Theory 68: Down to the Ground: Meister Eckhart 69: Men in Black: The German Dominicans 70: A Wing and a Prayer: Angels in Medieval Philosophy 71: Alle Maner of Thyng Shall be Welle: English Mysticism 72: Say it With Poetry: Chaucer and Langland 73: The Good Wife: Gender and Sexuality in the Middle Ages 74: The Most Christian Doctor: Jean Gerson 75: Morning Star of the Reformation: John Wyclif 76: The Prague Spring: Scholasticism Across Europe 77: Renaissance Men: Ramon Llull and Petrarch