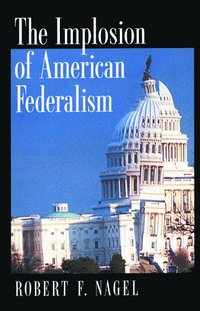 The Implosion of American Federalism

av Robert F Nagel
Häftad Engelska, 2002-12-01
369
Köp
Spara som favorit
Finns även som
Visa alla 2 format & utgåvor
At a time of unprecedented national power, why do so many Americans believe that our nationhood is fragile and precarious? Why the talk-among politicians, academics, and jurists-of "coups d'etat," of culture wars, of confederation, of constitutional breakdown? In this wide-ranging book, Robert Nagel proposes a surprising answer: that anxiety about national unity is caused by centralization itself. Moreover, he proposes that this anxiety has dangerous cultural
consequences that are, in an implosive cycle, pushing the country toward ever greater centralization.
Visa hela texten

"His voice is conservative but with a surprising twist....[Nagel] suggests that the Court's 'new federalism' jurisprudence falls far short of restoring state government and politics to their full and proper vigor. "-The Washington Post

"A subtle and compelling analysis of the leading cases, which makes up the bulk of his splendid book, Nagel shows, first, that the Supreme Court has not really reasserted federalism but rather "domesticated" it. -The Weekly Standard

"Mr. Nagel...has produced a book that is at once scholarly and engaged...The case he makes is compelling."-The Washington Times

"No recent book matches Nagel's thoughtful and thought-provoking observations on federalism, the Supreme Court, and the state of American politics."-Michael S. Greve, AEI

"Confirms Nagel's reputation as one of the few truly radical thinkers writing on the Constitution....The book will enrage some and trouble others, but no one interested in constitutional law-or the health of the federal Republic-can afford to ignore Nagel's views."-H. Jefferson Powell, Duke University

"Robert Nagel painstakingly dissects overblown claims that the Supreme Court's recent decisions have already put in place a radical anti-nationalism. While despairing of the possibility that we will turn our backs on the nationalism to which we have become accustomed, Nagel defends those who would attempt to revitalize state governments in the face of our nationalized culture."-Mark Tushnet