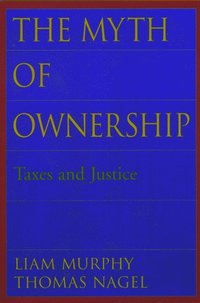 The Myth of Ownership

av Liam Murphy
Häftad Engelska, 2004-12-01
399
Köp
Spara som favorit
Finns även som
Visa alla 1 format & utgåvor
In a capitalist economy, taxes are the most important instrument by which the political system puts into practice a conception of economic and distributive justice. Taxes arouse strong passions, fueled not only by conflicts of economic self-interest, but by conflicting ideas of fairness.
Visa hela texten

"Murphy and Nagel claim that pretax income is a myth, and, as such, has no moral significance.... The Myth of Ownership significantly increases the sophistication of the discussion [fairness in taxation]." Michigan Law Review

"The thoughts in this book deserve examination, especially the views of Nagel and Murphy on the self-interest each taxpayer reasonably has in the social justice purchased by hard-earned money....[They] offer ideas that would improve the national debate."David Cay Johnston,New York Times Book Review

"The Myth of Ownership...should be read by all who wish to enter the discussion regarding taxes."William Michell Law Review

"The authors very effectively argue that the taxation, such as the benefit and ability-to-pay principles, fall victim to a fatal defect. Justice in taxation cannot be assessed apart from a general theory of property rights."The Mises Review

"The best book by far on the political morality of taxation. In a clear and compelling analysis, Murphy and Nagel expose the mistake of thinking that individuals own their pretax income and they examine the social benefits of justifiable tax policy. Taking this book's message to heart would transform contemporary democratic politics."Amy Gutmann, Provost and Laurance S. Rockefeller University Professor of Politics, Princeton University

"This magnificent contribution from the distinguished philosophers Liam Murphy and Thomas Nagel reminds us that fundamental issues of justice lie at the core of often mundane debates about taxation. The provocative thesis of The Myth of Ownership that the tax system helps create, rather than conforms to, the overall system of property rights has profound policy implications. I highly recommend this engaging book and the rethinking of first principles it
inspires to anyone interested in taxation and the role of government in society and the economy."Joel Slemrod, Paul W. McCracken Collegiate Professor of Business Economics and Public Policy, University of Michigan