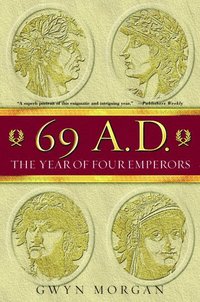 The Year of Four Emperors

av Gwyn Morgan
Häftad Engelska, 2007-03-01
182
Köp
Spara som favorit
Finns även som
Visa alla 2 format & utgåvor
The Year of Four Emperors, so the ancient sources assure us, was one of the most chaotic, violent and frightening periods in all Roman history: a time of assassinations and civil wars, of armies so out of control that they had no qualms about occupying the city of Rome, and of ambitious men who seized power only to lose it, one after another.
In 69 AD, Gwyn Morgan offers a fresh look at this period, based on two considerations to which insufficient attention has been paid in the past. First, that we need to unravel rather than cherry-pick between the conflicting accounts of Tacitus, Plutarch and Suetonius, our three main sources of information. And second, that the role of the armies, as distinct from that of their commanders, has too often been exaggerated. The result is a remarkably accurate and insightful narrative
history, filled with colorful portraits of the leading participants and new insights into the nature of the Roman military Morgan ranges from the suicide of Nero in June 68 to the triumph of Vespasian in December 69. In between, three other emperors hold power. We meet Galba, old, tightfisted and conservative,
who was declared emperor in June 68 and assassinated in January 69. Otho, once Nero's boon companion, who was responsible for murdering Galba, seized power in a coup in Rome in January 69 and, to everybody's surprise, committed suicide three months later in a vain attempt to end the civil wars. Vitellius, as indolent as he was extravagant, who was put forward by two ambitious lieutenants, recognized by the senate in Rome once they heard of Otho's death in April, and cut down by Vespasian's
partisans in the last days of December. And then there is Vespasian, the candidate who looked least likely to succeed, but (according to Tacitus) was still the first to be improved by becoming emperor.
A strikingly vivid account of ancient Rome, 69 AD is an original and compelling account of one of the best known but perhaps least understood periods in all Roman history.
Visa hela texten

Martin Empson, Times Literary Supplement Morgan's book is a fresh and accessible look at a period that has been discussed, with sometimes horrible fascination, since antiquity itself.


Cynthia Damon, Classical Journal This is a magisterial performance. Given the solid scholarship that underlies the performance - and Morgan's articles are models of their kind - one realizes that the presentation is meant to clarify, not evade.

<br>Gwyn Morgan is Professor of Classics and History at the University of Texas at Austin.<br>

Introduction 1: The Fall of Nero and the Julio-Claudian House 2: The Reign of Galba 3: Adoption and Assassination 4: The Opening of the Vitellian Offensive (January-February) 5: Otho Prepares for War (January-February) 6: The War between Otho and Vitellius (March-April) 7: The Reign of Vitellius (April-September 69) 8: The Beginning of the End: Vespasian through August 69 9: The Opening of the Flavian Offensive (August-October) 10: End-Game (November-December) Conclusion Appendices