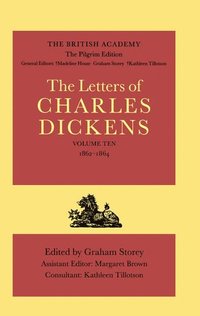 The British Academy/The Pilgrim Edition of the Letters of Charles Dickens: Volume 10: 1862-1864

av Charles Dickens
Inbunden Engelska, 1998-04-01
5317
Köp
Spara som favorit
Kan tyvärr inte levereras innan julafton.
This volume presents 918 letters, 435 previously unpublished. Our Mutual Friend, Dickens's main work in this period, comes out monthly from 30 April 1864 to 31 October 1865. The three highly successful All the Year Round Christmas numbers, "Somebody's Luggage", "Mrs. Lirriper's Lodgings" and "Mrs. Lirriper's Legacy", take up much of his energies. Public readings continue, though less frequently; and Gad's Hill, where he entertains many of his
friends, plays an increasingly major part in his life. But there is no other period in which he visits France so often, generally alone. The deliberately mystifying language he uses about these visits suggests he was seeing Ellen Ternan there, but there is no evidence to prove it.
Visa hela texten

Matthew Reynolds, The Times Literary Supplement Enshrined within its boards, accurately edited, annotated to the full, are small missives to his friends and family, curt business letters .. The impressive variety of these epistles is matched by the range of sources from which the editors have garnered them.

`Each volume of this edition wins acclaim as it appears, and it is right that it should do so. Kathleen Tillotson, Graham Storey and their team are deserving of every word of praise accorded to them for their meticulous and wide-ranging research.' Claire Tomalin, Times Literary Supplement

`The dynamism the letters convey is breathtaking . . . Like its predecessors, this new volume of the Pilgrim edition is a model of imaginative scholarship. . . . The magnificent footnotes (an absorbing read, even without the letters) unroll the whole cavalcade of contemporary life...' John Carey, Sunday Times

`The editing of the volume is as scrupulous and informative as readers of the Pilgrim Edition have by now come to expect. Many quiet triumphs of detection are recorded in the footnotes.' Dan Jacobson, Sunday Telegraph

K J Fielding, YES, 30, 2000 we are faced with a figure who challenges us in a different way from the probing, sparkling, illuminating actor and observer of the 1840s and 1850s. This appears more clearly because of the Pilgrim's editing, its continued reliability and restraint and balanced judgement, and its attention to the general scene. As conceived and carried through, this is a superlative work on a grand scale. The editing is challenging in its restraint. It gives the evidence, and leaves
conclusions to be drawn by readers ... there is a great deal in the ongoing Letters which is illuminating, that may prevent oversights about Dickens and his writing, and that is even essential to a full understanding.