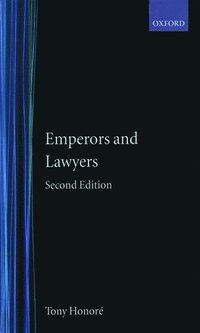 With a Palingenesia of Third-Century Imperial Rescripts 193-305 AD

av Tony Honor
Inbunden Engelska, 1994-07-01
1989
Köp
Spara som favorit
This is the second edition of an original and controversial book.
Updated and in large part rewritten, this edition includes on a high-density diskette a reconstruction (Palingenesia) of the 2,609 rescripts. This new reference will enable scholars to read the texts chronologically and to judge the soundness of the arguments advanced.
Visa hela texten

The Classical Review 'This edition is about a third longer than the first, and the lines of argument are fuller and clearer...The arguments presented are considerably more powerful than in the first edition,'