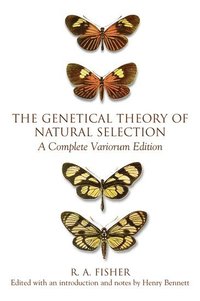 The Genetical Theory of Natural Selection

av R A Fisher
Inbunden Engelska, 1999-10-01
1159
Köp
Spara som favorit
This is a definitive edition of R A Fisher's classic - probably the best known book in evolutionary biology after Darwin's Origin of Species. Incorporated into the text of the original 1930 Clarendon Press edition are the modifications Fisher made to the second edition, published by Dover in 1958, and unpublished material that was interleaved in Fisher's own copy. No other version of this classic exists in print. It will be of equal interest to
evolutionary biologists, mathematicians, and historians of science.
Visa hela texten

W.D Hamilton FRS, Department of Zoology, University of Oxford For a book that I rate only second in importance within evolution theory to Darwin's "Origin" as joined with its supplement, "Descent of Man", and as, in my opinion, undoubtedly one of the greatest books of the present century, the appearance of a variorum version of the Genetical Theory of Natural Selection is a major event ... In some ways some of us have overtaken Fisher; in many, however, this brilliant, daring man is still far in front.