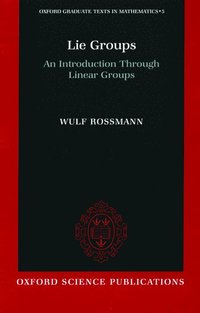 An Introduction Through Linear Groups

av Wulf Rossmann
Inbunden Engelska, 2002-01-01
1461
Köp
Spara som favorit
Finns även som
Visa alla 1 format & utgåvor
An introduction to the theory of Lie groups and their representations at the advanced undergraduate or beginning graduate level. Covering the essentials of the subject, starting from basic undergraduate mathematics, it proceeds through the fundamentals of Lie theory up to topics in representation theory, such as the Peter-Weyl theorem, Weyl's character formula, and the Borel-Weil theorem, all in the context of linear groups.
Visa hela texten

The Mathematical Gazette The book benefits from a considerable number of exercises in each chapter. It is well worth considering as a course text.


EMS The book is very well written, covering essential facts needed for understanding the theory, and is easy to use when preparing courses on Lie groups ... This is an excellent addition to the existing literature and should be useful for teachers and students, and for mathematicians and mathematical physicists.


Bulletin of the American Mathematical Society Anyone who has been privileged to work with Rossmann's research ideas knows that he is beholden to no one's traditions but his own. In capable hands, that kind of free thinking invariably leads to considerable and unanticipated advances. This time Rossmann has turned his attention to the exposition of elementary Lie theory and has, indeed, advanced the subject considerably.


Bulletin of the American Mathematical Society Rossmann provides nearly the entire dictionary between linear Lie groups and their Lie algebras ... Nothing beyond linear algebra, rudimentary abstract group theory, and multivariable calculus (up to the inverse function theorem) is required. In particular there is no mention of manifolds, no use of the Frobenius theorem, and no mention of homotopy groups. This is a significant accomplishment.


A. W. Knapp, The American Mathematical Monthly Rossmann's book is a gem ... His development has some elements that are new to me, and I regard those elements as a breakthrough in making elementary Lie theory more widely accessible.