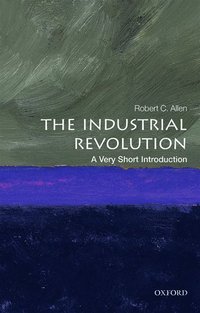 av Robert C Allen
Häftad Engelska, 2017-02-23
96
Köp
Spara som favorit
Finns även som
Visa alla 2 format & utgåvor
The Industrial Revolution was one of the great, transforming events of world history. Robert C. Allen explains what happened during this period, and why. He asks why the revolution occured in Britain rather than other countries, and looks at the impact of changing technology and business organizations on contemporary social structures.
Visa hela texten

Nick Crafts, Professor of Economic History, University of Warwick An authoritative overview of recent perspectives on the Industrial Revolution which is very clearly written and a pleasure to read.

Bob Allen is Global Distinguished Professor of Economic History at New York University, Abu Dhabi, and a Senior Research Fellow of Nuffield College, Oxford. Allen has written on English agricultural history, international competition in the steel industry, the extinction of whales, and contemporary policies on education. His articles have won the Cole Prize, the Redlich Prize, and the Explorations Prize. His books include Enclosure and the Yeoman: The Agricultural Development of the South Midlands, 1450-1850 (2009), and Farm to Factory: A Re-interpretation of the Soviet Industrial Revolution (2003), both of which won the Ranki Prize of the Economic History Association, The British Industrial Revolution in Global Perspective (2009), and Global Economic History: A Very Short Introduction (2011). Bob Allen is a Fellow of the British Academy and the Royal Society of Canada.