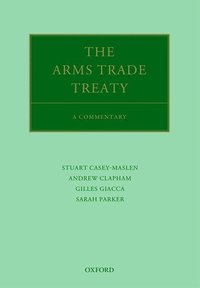 The Arms Trade Treaty: A Commentary

av Andrew Clapham
Inbunden Engelska, 2016-06-16
2431
Köp
Spara som favorit
Finns även som
Visa alla 2 format & utgåvor
The Arms Trade Treaty is the first universal disarmament treaty to control the export and import of all conventional arms. This commentary describes each provision of the Treaty, how it was negotiated, and the key challenges to its implementation.
Visa hela texten

Marlitt Brandes LL.M., German Yearbook of International Law The commentary constitutes a meticulous and well-structured study of the ATT that will be highly useful not only to academics but also to practitioners working on the subject of arms transfers. Above all, it sheds light on a number of vague terms and potential loopholes in the ATT by reference to the treatys drafting process, its object and purpose, States parties other relevant obligations under international law and their initial views on how the treaty
should be interpreted.