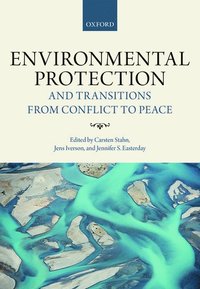 Environmental Protection and Transitions from Conflict to Peace

av Carsten Stahn
Inbunden Engelska, 2017-10-12
1399
Köp
Spara som favorit
Finns även som
Visa alla 2 format & utgåvor
This book examines the protection of the environment in post-conflict societies, with regard both to the maintenance of natural ecosystems and to the function of environmental protection in the peace-building process, addressing the strengths and weaknesses of different bodies of law.
Visa hela texten

Hijam Liza Dallo Rihmo, Human Rights Review Environmental Protection and Transitions from Conflict to Peace offers a path-breaking (and much needed) contribution to peacebuilding by emphasizing the significance of environment in rebuilding war-torn societies. The book delves deeply into the legal matters of post-war environmental protection; it will be useful not only to law practitioners and researchers, but also to scholars and advocates of peace, human rights, and environmental protection.

Carsten Stahn is Professor of International Criminal Law and Global Justice at Leiden University and Program Director of the Grotius Centre. He is the author of The Law and Practice of International Territorial Administration: Versailles to Iraq and Beyond. He has published articles on international criminal law and transitional justice in leading international journals (American Journal of International Law, European Journal of International Law, Journal of International Criminal Justice, Harvard International Law Journal), and edited several collections of essays in the field. Jens Iverson is a Researcher for the Jus Post Bellum project and an attorney specializing in public international law. A member of the California Bar, the Thurston Society, and the Order of the Coif, he received his Juris Doctor cum laude from the University of California, Hastings, and his Bachelor of Arts from Yale University. He has worked with the Cambodian Genocide Program, the Documentation Centre of Cambodia, and the Coalition for the International Criminal Court. As the co-founder of a human rights clinic, he helped represent the former Prime Minister of Haiti in a successful petition to the Inter-American Commission on Human Rights that ultimately resulted in a landmark ruling requiring Haitian prison reform. He has practiced at the International Criminal Tribunal for the former Yugoslavia on both the Popovic et al and Prlic et al cases. Jennifer Easterday is a Researcher for the Jus Post Bellum project. She is also an international justice consultant and a Trial Monitor for the Open Society Justice Initiative. She previously worked for International Criminal Law Services, an NGO based in The Hague, on a variety of international criminal law capacity-building projects in domestic jurisdictions in the former Yugoslavia and Africa. She has also worked as a Senior Researcher and Trial Monitor for the UC Berkeley War Crimes Studies Center, researching and monitoring the Special Court for Sierra Leone trial of Charles Taylor. She has experience at the ICTY and with other international criminal law and human rights NGOs in the United States and Latin America. She received her Juris Doctor from the University of California, Berkeley School of Law and is a member of the California State Bar.